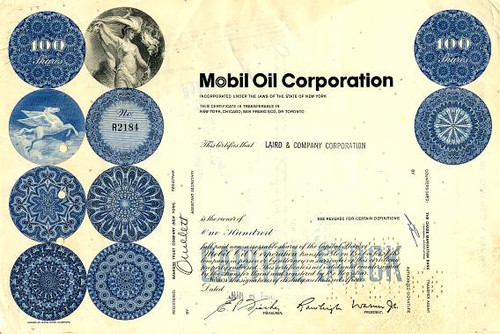 Beautifully engraved certificate from the Mobil Oil Corporation issued no later than 1966. This historic document was printed by the American Banknote Company and has a few images around it with a vignette of an allegorical woman holding a torch and a flying unicorn. This item has the printed signatures of the Company's President and Treasurer. 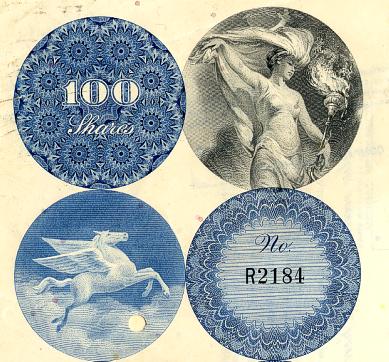 Certificate Vignette
Exxon Mobil Corporation is a leading international energy company whose subsidiaries have operations in approximately 200 countries and territories. In the United States, ExxonMobil has significant exploration and production, refining and marketing and chemicals operations. ExxonMobil is one of the largest oil and gas producers and reserve holders in the United States, with a portfolio including Alaska, onshore Gulf Coast and deepwater Gulf of Mexico. In addition, there are approximately 16,000 Exxon and Mobil branded service stations in the U.S., as well as seven refineries, four of which are integrated petrochemical facilities.