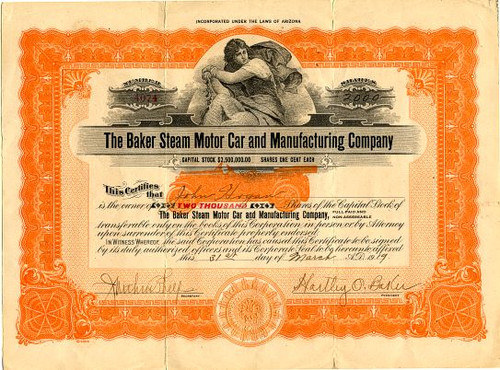 Beautiful certificate from the Baker Steam Motor Car and Manufacturing Company issued in 1919. This historic document was printed by Goes Banknote Company and has an ornate border around it with a vignette of a woman holding staff and an underprint of the Baker Steam Motor Car. This item has the signatures of the Company's President, Hartley O. Baker and Secretary and is over 89 years old. Clean Signature. Folded in thirds from original mailing. 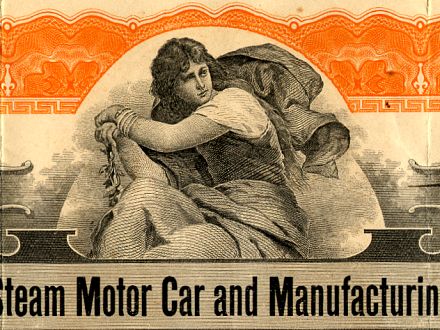 Certificate Vignette
A steam engine is an external combustion engine (ECE -- the fuel is combusted away from the engine), as opposed to an internal combustion engine (ICE -- the fuel is combusted within the engine). While gasoline-powered ICE cars have an operational thermal efficiency of 15% to 30%, early automotive steam units were capable of only about half this efficiency.[citation needed] A significant benefit of the ECE is that the fuel burner can be configured for very low emissions of carbon monoxide, nitrogen oxides and unburned carbon in the exhaust, thus avoiding pollution. Steam-powered and electric cars outsold gasoline-powered ones in many U.S. states prior to the invention of the electric starter, since internal combustion cars relied on a hand crank to start the engine, which was difficult and occasionally dangerous to use, as improper cranking could cause a backfire capable of breaking the arm of the operator. Electric cars were popular to some extent, but had a short range, and could not be charged on the road if the batteries ran low. Early steam cars, once working pressure was attained, could be instantly driven off with high acceleration. But they could take over a minute to start from cold, plus time to get the burner to operating temperature. To overcome this, development has been directed toward flash boilers, which heat a much smaller quantity of water to get the vehicle started, and, in the case of Doble cars, spark ignition diesel burners. The steamer has other drawbacks, also. The absence of a gearbox is more than counterbalanced by the weight of cooling and forced draft fans, fans, and boiler feed, fuel feed, and air pumps; the battery and fan to feed even a flash boiler will more than overcome the weight of a gearbox, and need to run even at idle. Furthermore, the radiator must be larger, since all heat engines depend on the temperature differences in the working fluid; in steam cars, this heat exchange must be larger and more rapid, and so, too, must the radiator. Although the first applications of steam to propelling a road vehicle were attempted in the 17th century, it was not until the advent of high pressure steam engines, in the early 1800s, that such vehicles became a practical proposition. Limitations in manufacturing technology and the poor condition of road surfaces meant that nothing that could be realistically regarded as a 'steam car', suitable for personal transportation, was created until the end of the 19th century. Perhaps the best-known and best-selling steam car was the Stanley Steamer, produced from 1896 to 1924. Between 1899 and 1905, Stanley outsold all gasoline-powered cars, and was second only to Columbia Electric in the US.[3] It used a compact fire-tube boiler to power a simple double-acting two-cylinder engine. Because of the phenomenal torque available at all engine speeds, the steam car's engine was typically geared directly to the rear axle, with no clutch or variable speed transmission required. Until 1914, Stanley steam cars vented their exhaust steam directly to the atmosphere, necessitating frequent refilling of the water tank; after 1914, all Stanleys were fitted with a condenser, which considerably reduced their water consumption. In 1906 the Land Speed Record was broken by a Stanley steam car, piloted by Fred Marriott, which achieved 127 mph (203 km/h) at Ormond Beach, Florida. This annual week-long "Speed Week" was the forerunner of today's Daytona 500. This record was not exceeded by any car until 1910, and, though Barber-Nichols later held the US steam-powered record, the FIA international record was only broken by a another steam car on August 25, 2009 by Team Inspiration of the British Steam Car Challenge.