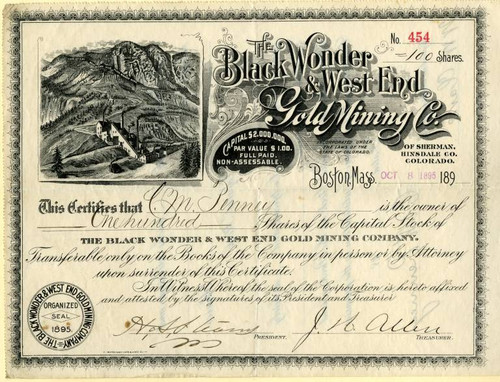 Beautiful mining stock certificate for 100 shares from the Black Wonder & West End Gold Mining Co. issued in 1895. This historic document has an ornate border around it with a vignette of a mill on a mountain side and mining map. This item has the hand signatures of the Company's President, H. A. Stearns, J. H. Allen, and Secretary. EF+. 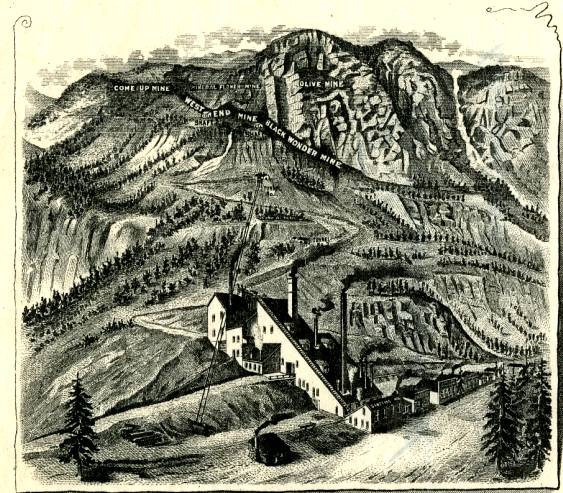 Certificate Vignette
Incorporated under laws of Colorado in 1895;Business office was located at 244 Washington Street, Boston, Massachusetts. Black Wonder and' West End Gold Mining Co. (Capital, $2,000,000); Homer Harrington. Supt.; owners Black Wonder and West End lodes; development--Black Wonder, 2,000 feet; West End, 250 feet; mine connected with $75,000 mill by tramway; steam; thirty stamps. Hinsdale County is one of the 64 counties of the U.S. state of Colorado. As of the 2010 census, the population was 843, making it the third-least populous county in Colorado. With a population density of only 0.75 inhabitants per square mile (0.29/km2), it is also the least-densely populated county in Colorado. The county seat and only incorporated municipality in the county is Lake City. The county is named for George A. Hinsdale, a prominent pioneer and former Lieut. Governor of Colorado. History from Wikipedia and OldCompany.com (old stock certificate research service) Sherman, like so many, is now a ghost town since mining ceased in the 1920's. GVF.