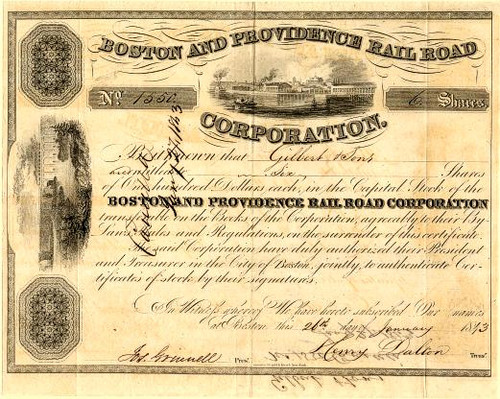 Beautifully engraved Certificate from the famous Boston and Providence Railroad issued no later than 1869. This historic document was has an ornate border around it with a vignettes of a train crossing a bridge over water, and a water scene with a city in the background. On the left side there ia s vignette of the Canton Viaduct. This item is hand signed by the company's president and treasurer and is over 137 years old.

Certificate Vignette
Surveying, mapping, and construction started on the Baltimore and Ohio in 1830, and fourteen miles of track were opened before the year ended. This roadbed was extended in 1831 to Frederick, Maryland, and, in 1832, to Point of Rocks. Until 1831, when a locomotive of American manufacture was placed in service, the B & O relied upon horsepower. Soon joining the B & O as operating lines were the Mohawk and Hudson, opened in September 1830, the Saratoga, opened in July 1832, and the South Carolina Canal and Rail Road Company, whose 136 miles of track, completed to Hamburg, constituted, in 1833, the longest steam railroad in the world. The Columbia Railroad of Pennsylvania, completed in 1834, and the Boston and Providence, completed in June 1835, were other early lines. Surveys for, and construction of, tracks for these and other pioneer railroads not only created demands for special mapping but also induced mapmakers to show the progress of surveys and completed lines on general maps and on maps in "travelers guides". Planning and construction of railroads in the United States progressed rapidly and haphazardly, without direction or supervision from the states that granted charters to construct them. Before 1840 most surveys were made for short passenger lines which proved to be financially unprofitable. Because steam-powered railroads had stiff competition from canal companies, many partially completed lines were abandoned. It was not until the Boston and Lowell Railroad diverted traffic from the Middlesex Canal that the success of the new mode of transportation was assured. The industrial and commercial depression and the panic of 1837 slowed railroad construction. Interest was revived, however, with completion of the Western Railroad of Massachusetts in 1843. This line conclusively demonstrated the feasibility of transporting agricultural products and other commodities by rail for long distances at low cost. Early railroad surveys and construction were financed by private investors. Before the 1850 land grant to the Illinois Central Railroad, indirect federal subsidies were provided by the federal government in the form of route surveys made by army engineers. In the 1824 General Survey Bill to establish works of internal improvements, railroads were not specifically mentioned. Part of the appropriation under this act for the succeeding year, however, was used for "Examinations and surveys to ascertain the practicability of uniting the head-waters of the Kanawha with the James river and the Roanoke river, by Canals or Rail-Roads."