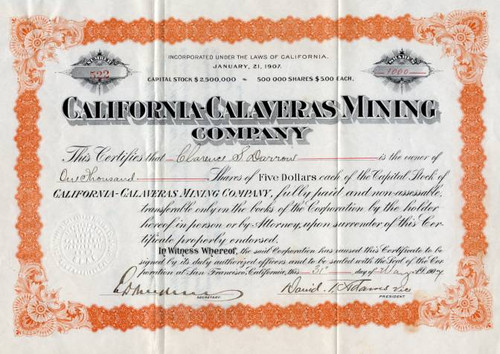 Beautiful certificate from the California-Calaveras Mining Company issued in 1907. This historic document has an ornate border around it with a vignette of the company name. This item has the original signatures of the Company's Vice President, and Secretary, and is over 106 years old.

Certificate Vignette
Clarence Seward Darrow (April 18, 1857 March 13, 1938) was an American lawyer and leading member of the American Civil Liberties Union, best known for defending teenage thrill killers Leopold and Loeb in their trial for murdering 14-year-old Robert "Bobby" Franks (1924) and defending John T. Scopes in the Scopes "Monkey" Trial (1925), in which he opposed William Jennings Bryan (statesman, noted orator, and 3-time presidential candidate). Called a "sophisticated country lawyer", he remains notable for his wit and agnosticism, which marked him as one of the most famous American lawyers and civil libertarians. In January of 1904, the California-Calaveras Mining Company was organized, with David T. Adams as Vice-President. Some gold recovery was made in 1910, the last year that any activity was noted. ADAMS David T, - Duluth. Office 503 Providence bldg. Mining engineer. . Born Sept 6, 1862 in Rockford 1ll, son of Jane (Castoney) Adams. Received a public school education. Engaged in prospecting and mining on the Iron Range of Minn, Mich and Wis; gold mining in California and copper mining in Mexico; a pioneer of the Mesaba Iron Range; compiled and published the first map and was the first to develop merchantable iron ore on that range 1891; located and developed Fayal. Spruce, Cloquet and Adams groups of mines at Eveleth and established Adams Mining Co; located and developed Meadow Mine, Aurora and established Meadow Mining Co; located and developed Lone Jack, Victoria. Bessemer, Moose, Auburn and Commodore mines at Virginia; the Kanawha and Cincinnati at Biwabic; the Tener, Shenango and Weed at Chrisholm together with several other mines on different parts of the range: founder and locater of the town of Virginia and locater and promoter of the city of Eveleth. Pres, treas and dlr of Adams Security Co: pres and dir of Meadow Mining Co corporations of Minn; and v pres and dir of California-Calaveras Mining Co of Cal. Member of Commercial Club Duluth; Order of Foresters and B P O E. California-Calaveras Mining Co. v. Walls, 170 Cal. 285 (1915) Jun, 1915 Clarence Darrow and several other attorneys represented a corporation in this California lawsuit over a $100,000 promissory note History from Wikipedia and OldCompany.com (old stock certificate research service)