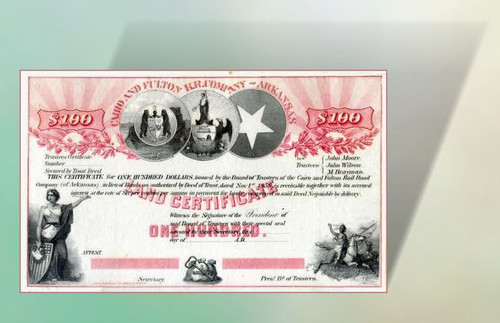 Beautifully engraved unissued certificate from the Cario and Fulton Railroad Company printed around 1859. The Trustees' names of John Moore, John Wilson and M. Brayman are printed on the certificate. This historic document has a border around it with vignettes of an allegorical woman holding a shield, an Indian on a horse, a bag of money with a key, and the coat of arms from three states. This item is over 140 years old. This is a very extraordonary certificate. The Cairo and Fulton Railroad Company of Arkansas was created by special act in Arkansas on January 12, 1853. The company was chartered on February 9, 1853. In 1871, the Cario and Fulton Railroad had completed 301 miles from the Missouri State line via Arkansas to the Texas State Line. The Cairo and Fulton was a land grant road. The first grant of 3,840 acres per mile was in 1853. The originial grand was renewed in 1866 to 6,400 acres per mile which gave the entire line 1,940,000 acres. In 1872, the company reorganized as the Cairo, Arkansas and Texas Railroad Company.