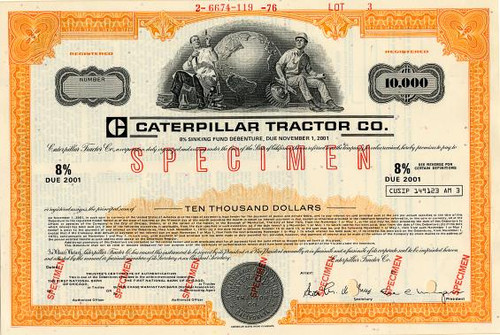 Beautiful engraved specimen certificate from the Caterpillar Tractor Company dated no later than 1978. Denominations may vary. This historic document was printed by American Bank Note Company and has an ornate border around it with a vignette of two men with the company's name and logo below. This item has the printed signatures of the Company's President and Secretary and is over 44 years old.

Caterpillar Inc., is an American corporation which designs, develops, engineers, manufactures, markets and sells machinery, engines, financial products and insurance to customers via a worldwide dealer network. Caterpillar is the world's leading manufacturer of construction and mining equipment, diesel and natural gas engines, industrial gas turbines and diesel-electric locomotives. With more than US$89 billion in assets, Caterpillar was ranked number one in its industry and number 44 overall in the 2009 Fortune 500. Caterpillar stock is a component of the Dow Jones Industrial Average. Caterpillar Inc. traces its origins to the 1925 merger of the Holt Manufacturing Company and the C. L. Best Tractor Company, creating a new entity, the California-based Caterpillar Tractor Company. In 1986, the company re-organized itself as a Delaware corporation under the current name, Caterpillar Inc. Caterpillar's headquarters are located in Peoria, Illinois, United States. The company also licenses and markets a line of clothing and workwear boots under its CAT / Caterpillar name. Caterpillar machinery is recognizable by its trademark "Caterpillar Yellow" livery and the "CAT" logo. History from Wikipedia and OldCompany.com (old stock certificate research service)

About Specimens Specimen Certificates are actual certificates that have never been issued. They were usually kept by the printers in their permanent archives as their only example of a particular certificate. Sometimes you will see a hand stamp on the certificate that says "Do not remove from file". Specimens were also used to show prospective clients different types of certificate designs that were available. Specimen certificates are usually much scarcer than issued certificates. In fact, many times they are the only way to get a certificate for a particular company because the issued certificates were redeemed and destroyed. In a few instances, Specimen certificates we made for a company but were never used because a different design was chosen by the company. These certificates are normally stamped "Specimen" or they have small holes spelling the word specimen. Most of the time they don't have a serial number, or they have a serial number of 00000. This is an exciting sector of the hobby that grown in popularity over the past several years.