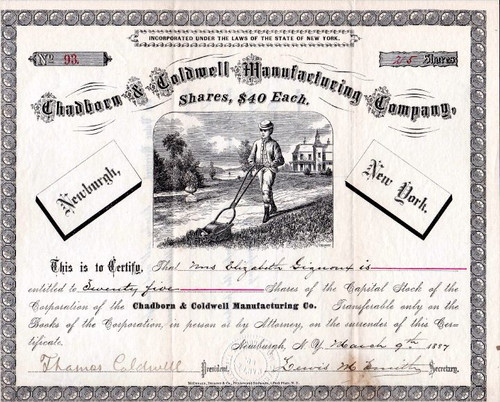 Beautifully RARE stock certificate (Possibly unique) from the Chadborn & Coldwell Manufacturing Co. issued in 1887. This historic document has an ornate border around it with a vignette of boy mowing the lawn. This item has the signatures of the Company's President, Thomas Coldwell and Secretary. This is the only example of this certificate we have seen. 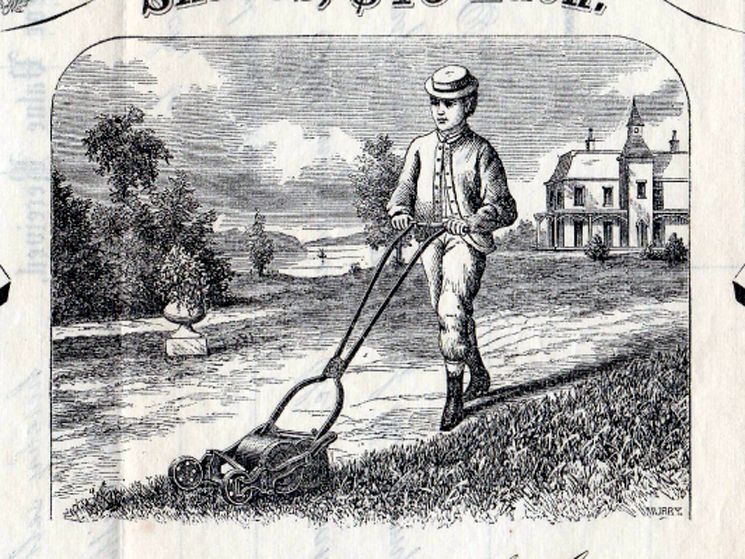 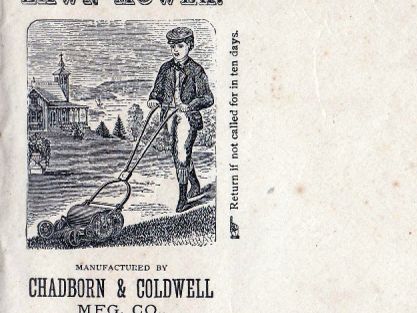 Certificate Envelope Vignette
George L. Chadborn and Thomas Coldwell ormed the firm of Chadborn, Coldwell & Company, which began operations in Newburgh, New York producing the Excelsior Roller Mower. It has been estimated that at this time there were only about three hundred American-made machines, plus a few imported English machines, in the country at that time. By 1891 the Chadborn & Coldwell Manufacturing Company of Newburgh was producing twenty thousand machines annually, and was in the process of expanding to be able to produce thirty thousand. In the same year Thomas Coldwell withdrew and formed the Coldwell Lawn Mower Company of Newburgh, and planned a new factory which could produce from 150 to 200 mowers each day. The business established by Thomas Coldwell was continued after his death in 1905 by his two sons, William H. and Harry T. and it remained in business for into the 1940s. Over the years it was merged into various other manufacturing companies and ultimately became part of the current Toro Company of Minneapolis, MN. Sources The History of Orange County New York, edited by Russel Van Deusen and Elms, Publishers. Middletown, N. Y. 1908. Downing's Newburgh Villa. Arthur Channing Downs, JR Bulletin of the Association for Preservation Technology, Vol. 4, No. 3/4 (1972), pp. iv+1-113