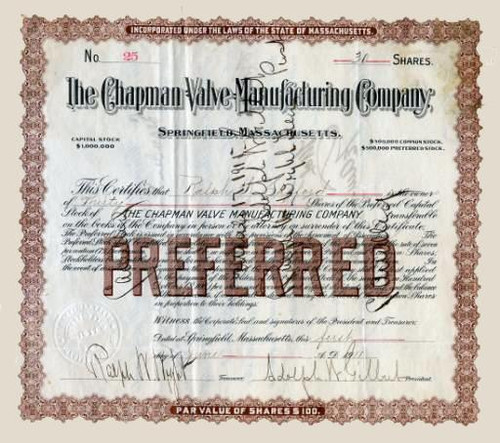 Beautifully engraved certificate from the Chapman Valve Manufacturing Company issued in 1911. This historic document has an ornate border around it. This item is hand signed by the Company's President ( Adolf W. Gilbert ) and Treasurer ( Ralph W. Wright ) and is over 93 years old. Chapman Valve manufactured fire hydrants from 1874 through the 1950's. They also produced valves for battleships, and participated in the top-secret Manhattan Project, which developed the first atomic bomb. Adolf Gilbert was originally from Bennington, Kansas prior to moving to Massachusetts. He was a co founder of the Bennington State Bank in 1883. His wife was Sarah Maria Nelson.