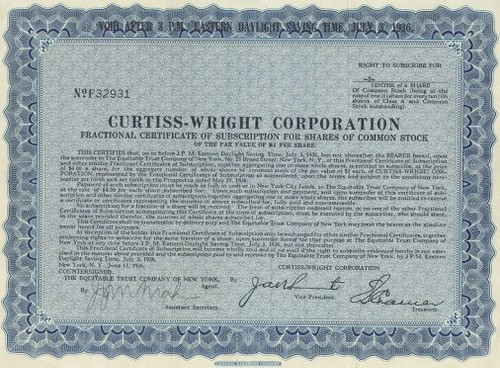 Beautifully engraved fractional certificate from the Curtiss - Wright Corporation issued in 1936. This historic document was printed by the Central Banknote Company and has an ornate border around it. This item is hand signed by the company's assistant secretary and has the printed signatures of the company's vice-president and treasurer and is over 72 years old. Early aviation certificates are hard to find. This company has a lot of history in early aviation with the Wright in the name coming from the Wright Brothers. In addition, this company was of significant importance to the outcome of WWII. They manufactured the P 40 Warhawk Fighter, C 46 Commando Cargo Transport, SB2C Helldiver Navy Bomber, Army A 25 Helldiver, Seagull Navy Scout Plane and the Republic Thunderbolt Fighter.