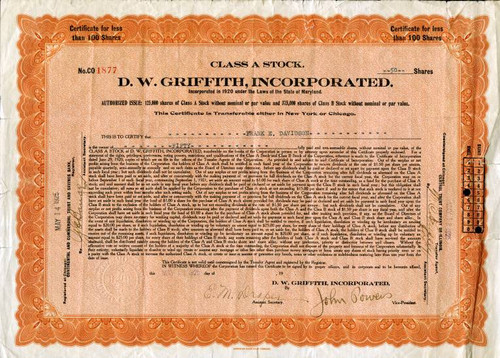 Beautifully engraved certificate from the D.W. Griffith, Incorporated issued in 1925. This historic document was printed by the American Banknote Company and has an ornate border around it. This item is hand signed by the Company's Vice President and Assistant Secretary and is over 89 years old. This is only the second time we have seen this certifcate. David Wark Griffith was born on January 22, 1875, in Crestwood, Kentucky - He died on July 23, 1948, in Hollywood, CA. He is know as one of the most famous film makers of all times. David Llewelyn Wark Griffith, commonly known as D.W. Griffith (January 22, 1875July 23, 1948) was an American film director. He is best known for being the director of the controversial film The Birth of a Nation. Biography Griffith was born in La Grange, Oldham County, Kentucky to Jacob "Roaring Jake" Griffith, a Confederate Army colonel and Civil War hero. He began his career as a hopeful playwright but met with little success. He then became an actor. Finding his way into the motion picture business, he soon began to direct a huge body of work. Between 1908 and 1913 (the years he directed for the Biograph Company), Griffith produced 450 short films, an enormous number even for this period. This work enabled him to experiment with cross-cutting, camera movement, close-ups, and other methods of spatial and temporal manipulation. On Griffith's first trip to California, he and his company discovered a little village to film their movies in. This place was known as Hollywood. With this, Biograph was the first company to shoot a movie in Hollywood: In Old California (1910). Influenced by a European feature film Cabiria from Italy, Griffith was convinced that feature films could be financially viable. He produced and directed the Biograph feature film Judith of Bethulia. This was one, if not "The" first feature ever produced in the United States. Biograph believed that longer features were not viable, and as actress Lillian Gish puts it "They (Biograph) thought that a movie that long would hurt their (The audience's) eyes". Because of this, and the overrun on the budget by the film which cost 30,000 dollars to produce, Griffith and Biograph parted ways, with Griffith taking his whole stock company of actors with him. His new production company became an autonomous production unit partner in Triangle Pictures Corporation with Keystone Studios and Thomas Ince. Through David W. Griffith Corp. he produced The Birth of a Nation (1915). 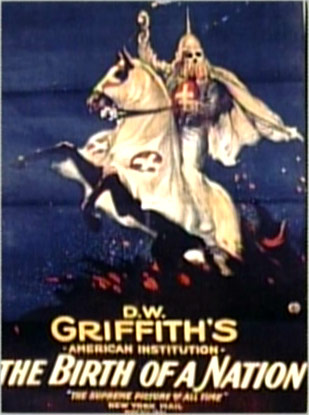 Birth of a Nation Poster
Birth of a Nation was extremely popular and is still considered the first great epic, but it expressed the racial views of the era (it depicts Southern pre-Civil War black slavery as a glorious old-fashioned way of life, and the Ku Klux Klan as a band of heroes restoring order to a post-Reconstruction black-ruled South). The partnership was dissolved in 1917, so Griffith went to Artcraft (part of Paramount), then to First National (1919-1920). At the same time he founded United Artists, together with Charlie Chaplin, Mary Pickford, and Douglas Fairbanks. Though United Artists survived as a company, Griffith's association with it was short-lived, and while some of his later films did well at the box office, commercial success often eluded him. Features from this period include Broken Blossoms (1919), Way Down East (1920), Orphans of the Storm (1921) and America (1924). Griffith made only two sound films, Abraham Lincoln (1930) and The Struggle (1931). Neither was successful, and he never made another film. For the last seventeen years of his life he lived as a virtual hermit in Los Angeles. He died in 1948 on his way to a Hollywood hospital from a hotel where he had been living alone. Achievements Griffith has been called the father of film grammar. Few scholars still hold that his "innovations" really began with him, but Griffith was a key figure in establishing the set of codes that have become the universal backbone of film language. He was particularly influential in popularizing "cross-cutting"--using film editing to alternate between different events occurring at the same time--in order to build suspense. That being said, he still used many elements from the "primitive" style of movie-making that predated classical Hollywood's continuity system, such as frontal staging, exaggerated gestures, minimal camera movement, and an absence of point of view shots. Some claim, too, that he "invented" the close-up shot. Credit for Griffith's cinematic innovations must be shared with his cameraman of many years, Billy Bitzer. In addition, he himself credited the legendary silent star Lillian Gish, who appeared in several of his films, with creating a new style of acting for the cinema. 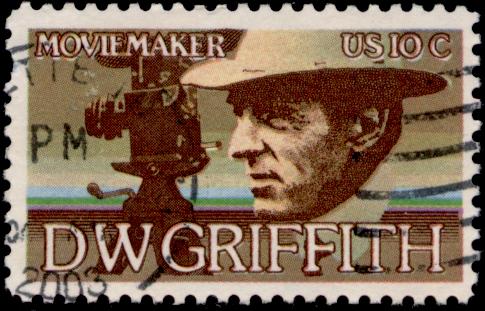 Stamp issued by the United States Postal Service commemorating D. W. Griffith.
Controversy Griffith was a highly controversial figure. Immensely popular at the time of its release, his film The Birth of a Nation (1915), based on the novel The Clansman was a white supremacist interpretation of history, and the National Association for the Advancement of Colored People attempted to have it banned. After that effort failed, they then attempted to have some of the film's scenes that they disagreed with censored. The scenes in question depict white members of the Ku Klux Klan killing Blacks to protect white women, which is portrayed as favorable toward the Ku Klux Klan members. Legacy Motion picture legend Charles Chaplin called Griffith "The Teacher Of Us All". This sentiment was widely shared. Filmmakers as diverse as John Ford and Orson Welles have spoken of their respect for the director of Intolerance. Whether or not he actually invented new techniques in film grammar, he seems to have been among the first to understand how these techniques could be used to create an expressive language. In early shorts such as Biograph's The Musketeers of Pig Alley (1912) which was the first "Gangster film", we can see how Griffith's attention to camera placement and lighting heighten mood and tension. In making Intolerance the director opened up new possibilities for the medium, creating a form that seems to owe more to music than to traditional narrative. Griffith was honored on a 10-cent postage stamp by the United States issued May 5, 1975. In 1953, the Directors Guild of America instituted the D.W. Griffith Award, its Guild's highest honor. Its recipients included Stanley Kubrick, David Lean, John Huston, Woody Allen, Akira Kurosawa, John Ford, Ingmar Bergman, Alfred Hitchcock and Griffith's friend Cecil B. DeMille. On 15 December 1999, however, DGA President Jack Shea and the DGA National Board--without membership consultation (though unnecessary according to DGA's regulations)--announced that the award would be renamed the DGA Lifetime Achievement Award because Griffith's film The Birth of a Nation had "helped foster intolerable racial stereotypes". The following living recipients of the award agreed with the guild's decision: Francis Ford Coppola, Robert Altman, and Sidney Lumet. D.W. Griffith made the following films: D.W. Griffith's Corner in Wheat & Selected Biograph Shorts (1909-1913) The Birth of a Nation (David W. Griffith Corp, for Epoch Producing Corp., 1915) Intolerance (Wark Producing Corporation, 1916) A Romance of Happy Valley (D.W. Griffith Short Story Series, for Artcraft, 1918) Broken Blossoms (D.W. Griffith for United Artists, 1919) The Love Flower (United Artists, 1920) The Idol Dancer (First National, 1920) Way Down East (D.W. Griffith, for United Artists, 1920) Orphans of the Storm (D.W. Griffith, Inc., for United Artists, 1921) Dream Street (D.W. Griffith, for United Artists, 1921) America (D.W. Griffith, Inc., for United Artists, 1924) Isn't Life Wonderful (D.W. Griffith, Inc., for United Artists, 1924) Sally of the Sawdust (Paramount Pictures, released through United Artists, 1925) History from Wikipedia and OldCompany.com The Struggle (D.W. Griffith, Inc., for United Artists, 1931)