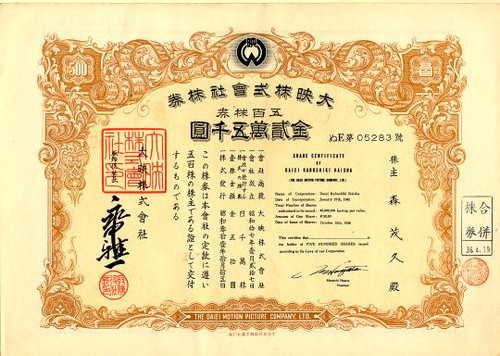 Beautiful RARE certificate from Daiei Kabushiki Kaisha (Daiei Motion Picture Company) iddued in 1956 . This historic document and has an ornate border around it with a vignette of the company logo. This item has the printed signature of the Company's President, Masaichi Nagata. Printed in Japanese and English. Founded in 1942 as Daiei Motion Picture Company, the studio went bankrupt in 1971. leading Japanese motion-picture studio that produced some of the major post-World War II film classics, although most of its releases were directed toward urban teenage audiences. The company was formed in 1942, when the Japanese government consolidated the production studios of Shinko, Daito, and Nikkatsu (Nikkatsu remained as an independent distribution company only). Three successful films, Kurosawa Akira's Rashomon (1950), which won the Grand Prize at the 1951 Venice Film Festival; Ugetsu monogatari (1953), directed by Mizoguchi Kenji; and Gate of Hell (195354), the first Japanese film to use colour, eased the company's financial difficulties. Despite its transition to wide-screen productions in the 1950s, the Daiei company was forced to declare bankruptcy in December 1971.