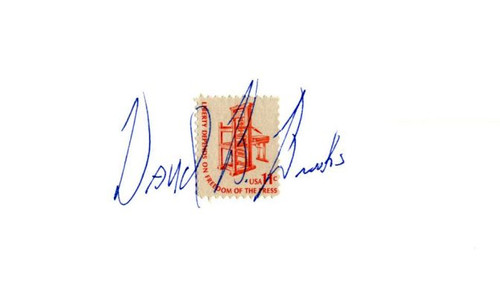 David Brooks's Autograph on a 3" x 5" card on a Freedom of the Press 11 Cent U. S. postage Stamp. David Brooks (born August 11, 1961) is a political and cultural commentator who considers himself a moderate and writes for The New York Times. He worked as an editorial writer and film reviewer for the Washington Times ; a reporter and later op-ed editor for The Wall Street Journal ; a senior editor at The Weekly Standard from its inception; a contributing editor at Newsweek and The Atlantic Monthly; and as a commentator on National Public Radio. He is now a columnist for The New York Times and commentator on PBS NewsHour. History from Wikipedia and OldCompany.com (old stock certificate research service)