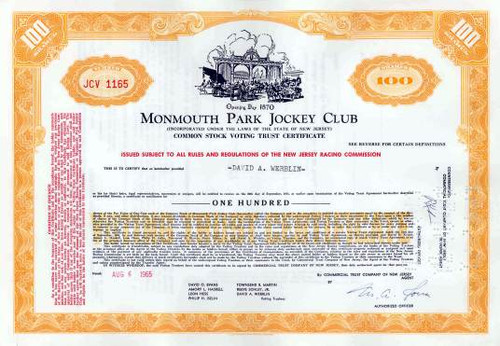 Beautifully engraved Certificate from the Monmouth Park Jockey ClubIssued to David A. Werblin in 1965. This historic document was printed by the Columbian Banknote Company and has an ornate border around it with a vignette of opening day at the track. This item has the printed signatures of the company's officer and is over 37 years old. 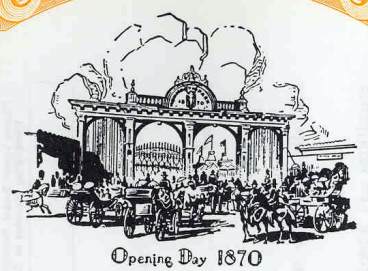 Certificate Vignette
Sports were a part of David (Sonny) Werblin's biography since he played lacrosse and managed the Rutgers swimming team. He accepted a talent agent position with the Music Corporation of America in 1934. Over the next 20 years, he represented such greats as Bob Hope, Jack Benny, Johnny Carson, and Elizabeth Taylor. As head of MCA-TV in the 1950s, and later president of the conglomerate, he was responsible for the success of the Ed Sullivan and Jackie Gleason shows. The New York Titans of the American Football League were up for sale in 1963 and Mr. Werblin tried in vain to get MCA to add the jewel to its crown. He and four partners then acquired the franchise for $1 million and renamed it the New York Jets. By hiring such high-priced talent as University of Alabama quarterback Joe Namath, he turned the Jets into a major professional team. Mr. Werblin also conceived a plan to transform the Hackensack swamplands into a sports capital serving New Jersey and New York. While serving as the unpaid first chairman of the New Jersey Sports and Exposition Authority in 1971, he gathered the funding from reluctant bankers and the necessary political clout to build a stadium, indoor arena, and race track. Giants' football team owner Wellington Mara told his friend New Jersey had much to prove, but Mr. Werblin convinced him moving the team to the sports complex was a winner. Today, the Jets also call the Meadowlands Sports Complex home. After six years on the Sports and Exposition Authority, and a stint as CEO of the Madison Square Garden Corporation, Mr. Werblin semi-retired and turned his talents toward Rutgers serving as a trustee and a member of the Board of Governors. Above all others, he gets the credit for ushering Rutgers into an era of participation in bigtime collegiate sports. David "Sonny" Werblin died in 1991.