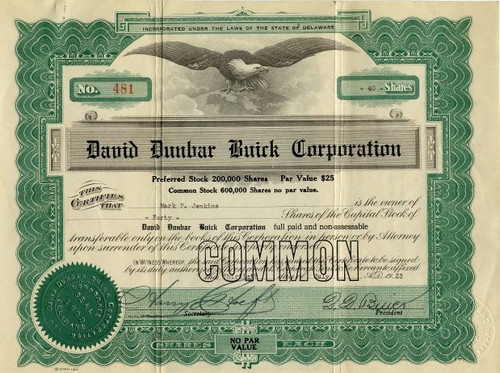 Beautiful certificate from the David Dunbar Buick Corporation issued in 1923. This historic document was printed by the American Banknote Company and has an ornate border around it with a vignette of an eagle. This item has the signatures of the Company's President, David Dunbar Buick and Secretary, and is over 85 years old.

David Buick's Signature
News Article from The New York Times on August 6, 1922 Company Organized by David Dunbar Buick. Buick Will Market It. A new automobile, to be known as a Dunbar, will soon be put on the market by a company organized by David Dunbar Buick , it was announced yesterday. Mr. Buick was the inventor or Deflectos of the valve-in-the-head engine used in the first Buick car, which he brought out in 1903. He retired from the motor industry in 1909 on account of ill health. The new Dunbar car will be ready for distribution next year. The factory location has not been - determined, but negotiations are pending for the pur- chase of the old Fiat plant, near Pough- keepsie. It is proposed to manufacture the Dunbar : in five models--touring car, "sedan, coupe, roadster and limousine. The company will be capitalize for $5,000,000. The engine of the Dunbar will be of the valve-in-head type. Although the David Dunbar Buick Corporation made several prototypes, the company never went into production. David Dunbar Buick was a Scottish born American inventor best known for founding the Buick Motor Company. He was born in Arbroath, Angus, Scotland moving to Detroit, Michigan at the age of two when his parents emigrated to the United States. He left school in 1869 and took employment working for a company which made plumbing goods. When the company ran into trouble in 1882, he and a partner took it over. At this time Buick began to show his promise as an inventor, producing many innovations including a lawn sprinkler, and a method for permanently coating cast iron with vitreous enamel which allowed the production of "white" baths at much reduced cost. Although cast iron baths are uncommon nowadays, the method is still in use for enamelling them. With the combination of Buick's innovation and his partner's sound business management the company became quite successful. During the 1890s, Buick developed an interest in internal combustion engines and began to spend his time on experimenting with them. This meant that he was spending little time on the plumbing business and as a result his business partner became impatient with him. The result was that the partnership was dissolved and the company was sold. Buick now had the time and capital to work on engines full-time, and he set up a new company, the Buick Auto-Vim and Power Company, in 1899 to do so. The stated aim of the company was to market engines for agricultural use. However Buick soon turned to the development of a complete car rather than just an engine. He also concentrated on research and development at the expense of manufacturing and sales. The result was that he ran through his capital by early 1902 without generating any significant return other than a single car. In early 1902, he set up a second company, the Buick Manufacturing Company, with the twin aims of marketing engines to other car companies and of manufacturing and selling its own cars. Once again manufacturing and development problems meant that by the end of 1902, Buick had run out of money with only one car to show for his work. However the concentration on development had also produced the, at the time revolutionary, "Valve-in-Head" overhead valve engine. This method of engine construction produces a much more powerful engine than the rival side valve engine design which all other manufacturers used at the time. Overhead valve engines have been used by most car manufacturers but now only GM and Chrysler produce "push-rod engines" with any great regularity. The money run out again and in 1903 Buick was forced to raise more money via a $5,000 loan from a friend and fellow car enthusiast, Benjamin Briscoe. With this financial help from Briscoe, Buick formed the Buick Motor Company which was to become the cornerstone of the General Motors empire. Buick died of colon cancer on March 5, 1929. History from Wikipedia and OldCompanyResearch.com (old stock certificate research service).