Beautifully engraved certificate from the Monmouth Park Jockey Club issued to Leon Hess in 1960-1963. This historic document was printed by the Columbian Banknote Company and has an ornate border around it with a vignette of Monmouth Park Jockey Club Opening Day in 1870. This item has the printed signatures of the Company's President and Secretary and is over 40 years old. 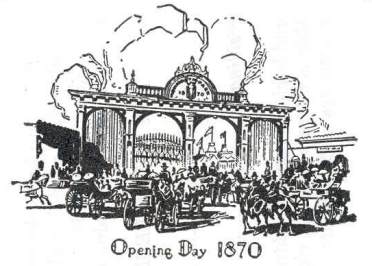 Certificate Vignette
Leon Hess was the owner of the New York Jets whose oil fortune made him one of the wealthiest owners in professional sports; his wish to see his team return to the Super Bowl for the first time since their 1969 title fell one game short in 1998; in March of 1963, a group including Hess and three partners purchased the American Football League's Jets, then known as the New York Titans, out of bankruptcy for $1million; he eventually bought out his partners in 1977; angered the league when he moved the team from Shea Stadium to the Meadowlands in New Jersey for the 1984 season; saw the team through several recent coaching changes, including the hiring of Bill Parcells after the 1996-97 season; an oilman since the Depression, Hess turned a New Jersey refining company into the multi-billion dollar Amerada Hess Corp.; he resigned as chairman and CEO in 1995. Hess died of complications from blood disease on May 7, 1999. Features of Monmouth Park Main Track: The main track is a 100-foot-wide, one-mile oval with 12 inches of aggregate sand drainage and 12 inches of crushed stone screenings topped off by a 4-inch cushion of sand and topsoil. The topsoil is a mixture of silt, clay and loam. Each 1/8 of a mile, or "furlong" originally a "furrow long" or the length of a plowed field, is marked off by a green and white pole located along the inside rail. Each ¼ mile is noted by a red and white pole, while 1/16 mile is designated by a black and white pole. Thus, the "quarter pole" is the red and white pole located on the "far turn," ¼ mile from the finish line. Turf Course: The turf course is a 90-foot-wide, 7/8 mile oval which is a mixture of four kinds of bluegrass and Manhattan 2 rye grass. Paddock and Walking Ring: The paddock is located behind the Clubhouse and consists of a 16-stall oak saddling enclosure leading to the beautiful, tree-shaded English Walking Ring, where the horses are paraded for the public and the jockeys receive last minute instructions. This is one of the most picturesque and relaxing areas at Monmouth Park, and everyone is encouraged to visit and take a close-up look at the courageous equine and human athletes. The Backstretch: The backstretch not only houses approximately 1,600 horses in 38 barns, it also serves as a small community for the horsemen and track's employees. Located in the center of the backstretch in an area known as "The Quadrangle" is the Frenchman's Kitchen, whose motto is "Eat your betting money, but never bet your eating money." The Quadrangle also houses a riding apparel shop, post office, and offices for the racing secretary, racetrack chaplain, horse identifier, state vets and others. A recreation hall features movies, seminars, church services, and games.