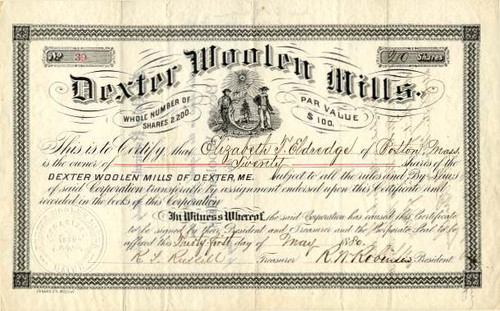 Beautifully engraved certificate from Dexter Woolen Mills issued in 1880. This historic document was printed by the Forbes Company and has an ornate border around it with a vignette the Maine State Seal. This item is hand signed by the Company's President ( Edward R. Robbins ) and Treasurer (R. S. Russell) and is over 124 years old. Albert F. Bradbury signed the back of the certificate as its Secretary. 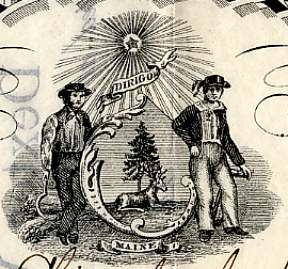 Certificate Vignette
Richard W. Robinson was a successful woolen mill operator came who came to Dexter from Amesbury, Mass. He leased the the Dexter Mills from 1864 to 1869. Albert F. Bradbury, a resident of Dexter, then organized a corporation called the Dexter Mills Company. This corporation operated until 1880 and then it was reorganized and its name was changed to the Dexter Woolen Mills Company. Richard W. Robinson became its president.