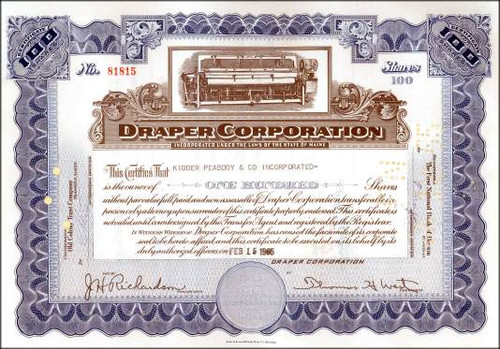 Beautifully engraved certificate from the Draper Corporation issued in the 1960's. This historic document was printed by the John A. Lowell Banknote Company and has an ornate border around it with a vignette of a Draper Textile Loom. This item has the printed signatures of the Company's President and Treasurer and is over 41 years old.

Certificate Vignette
During the 1880s alone, Draper companies produced and sold more than six million new high-speed spindles to textile companies. Draper looms were used around the world, and are still in use today. The company was originally established in 1816. Their plant had over 1,400,000 sq ft of floor space and 50 acres in Hopedale, Massachusettes. Hopedale's reputation as a town is mainly found in the Draper Corporation, producer of looms. The business started when Ebenezer Draper joined the community and built the first Draper Shop. The Draper era represents a unique study of the growth and development of a New England mill town. In its prime, over 3,000 people were employed there. In the late sixties, control of the Draper Corporation was passed to Rockwell International. Production ceased in the mid-seventies, thus closing the doors, not only to a building, but also to a period of history. Today, the abandoned and some suspect polluted factory site dominates the center of town in its decay. The last two decades have been tough economically on the people of Hopedale. The Draper Corporation took a very paternalistic view towards the town and when the plant closed, the taxpayers had to learn to govern, and support, themselves. Townspeople give a high priority to their children's education and the school system is well supported at Town Meeting. It can be said, however, that the town will survive, while retaining its image of a typical New England town.