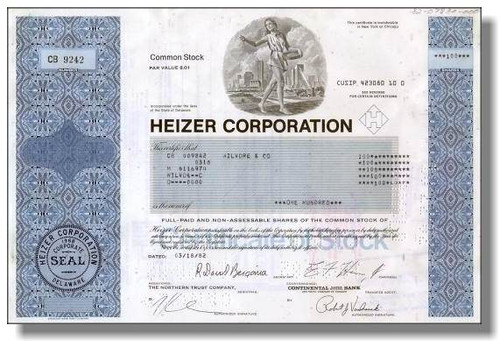 Beautifully engraved Certificate from the famous Heizer Corporation issued in 1982 -1983. This historic document was printed by the American Banknote Company and has an ornate block border around it with a vignette of a woman in a mini shirt sprinkling seeds with a large city in the background. This item has the printed signature of the company's founder Edgar F. Heizer, Jr., and is over 18 years old. at Heizer Corporation, a major Chicago-based venture capital firm. Heizer was a very successful mutual fund which invested in a lot of start ups including Federal Express Corporation, Amdahl Computers and Commodities Corporation. Edgar F. Heizer, the public venture firm's chairman and president, developed the new strategy, dubbed "deconglomeration," to buy conglomerates in the $200 million to $400 million range, break up their business parts, and reintegrate the pieces into new companies to be spun off via public sales Edgar F. Heizer, Jr., founded Heizer Corporation as a publicly traded business development company in 1969. He served as Chairman and Chief Executive Officer from 1969 until 1986, when Heizer Corporation was reorganized into a number of public and private companies. Mr. Heizer is currently a director of Chesapeake Energy Corporation and Material Sciences Corporation. He is also a Director of a number of private companies. Mr. Heizer was Assistant Treasurer of the Allstate Insurance Company from 1962 to 1969 in charge of Allstate's venture capital operations. He was employed by Booz, Allen and Hamilton from 1958 to 1962, Kidder, Peabody & Co. from 1956 to 1958, and Arthur Andersen & Co. from 1954 to 1956. He serves on the advisory board of the Kellogg School of Management at Northwestern University. Mr. Heizer is a director of Material Science Corporation, a New York Stock Exchange listed company in Elk Grove, Illinois, and several private companies. Mr. Heizer graduated from Northwestern University in 1951 and from Yale University Law School in 1954. Heizer Award The Heizer Doctoral Dissertation Award in New Enterprise Development was established through the original sponsorship of the Heizer Corporation, and the continuing sponsorship of Mr. Edgar F. Heizer, Jr. Its purpose is to recognize and honor outstanding doctoral research in the area of new Enterprise Development. The principal focus of the Heizer Award is on research that deals with the founding, management, growth, and development of high potential new ventures, with venture capital, or with corporate entrepreneurship. Dissertations dealing with small high-tech ventures and/or intermediate potential may also qualify for the Heizer Award. Specifically excluded from the Heizer Award are dissertations dealing primarily with small business, family business, minority business, and/or with the support systems (other than venture capital) that help facilitate the development of such businesses since such content are the focus of the NFIB Award.