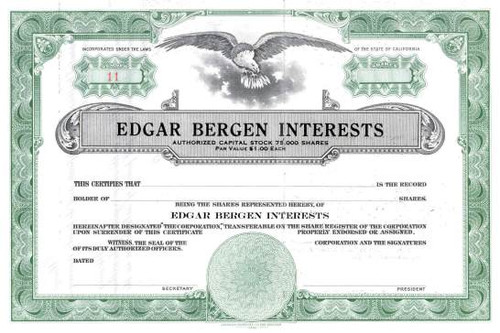 Beautifully engraved unissued certificate from the Edgar Bergan Interests. This historic document was printed by the Jeffries Banknote Company and has an ornate border around it with a vignette of an eagle. This is the first time we have seen this stock certificate and the only one we have. We are also including a check signed by Edgar Bergen made payable to the IRS dated in 1968. 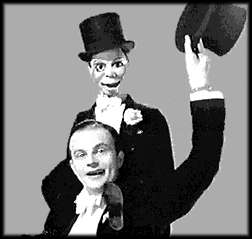 Edgar and Charlie
From the 1930's to the 1960's Edgar Bergen and his dummy Charlie McCarthy entertained millions around the world. Often controversial, Charlie McCarthy was able to say out loud the things other entertainers could only think. After all he's only a dummy, or was he? Born in Chicago as Edgar John Berggren on February 16, 1903, the famous ventriloquist was one of five children, the youngest of two sons, of Swedish immigrants. In the fall of 1919, for a fee of $36 paid to a bartender who was also a skilled carpenter, Edgar received the carved pine head of Charlie McCarthy. Bergen's new alter ego was an immediate success with both his classmates and his teachers. One night in December, 1936 Edgar Bergen got played a party at which Noel Coward happened to be one of the guests. Coward was so impressed by Bergen's dialogue that he got him an engagement at Manhattan's Rainbow Room. This show led to an invitation by Rudy Vallee to appear, for $150, as a guest artist on Vallee's radio show on December 17th in California. Bergen and McCarthy were an instant success. The one appearance was extended to three months. In May, 1937 Bergen signed a contract with Chase and Sanborn, the coffee company, for his own NBC radio program. The cast for the show included America's top comedian W.C. Fields, Don Ameche and Dorothy Lamour. The show was so strong that it led the ratings for nearly three years. All this from a ventriloquist, a visual as much as a vocal artist, on the radio. Over the next few years Bergen would develop the characters of Mortimer Snerd and Effie Klinker. Snerd, who came along in 1939, was a country bumpkin who even though appeared an idiot, often got the best of McCarthy and Bergen. Klinker, born in 1944, could best be described as a man-crazed spinstress from New England. While these and other dummies had their moments none of them would ever attain the popularity of Charlie McCarthy. All through his radio years and beyond, Bergen was active in the film industry. He played in twenty five full length movies or shorts, noteably Charlie McCarthy, Detective in 1939, and even a Disney cartoon and live action mix, Fun and Fancy Free in 1947. In 1937 Bergen won a special Academy Award for lifetime achievement and community service. The performing lifestyle of Bergen and his wife, model and actress Frances Westerman (they married in 1945) certainly transferred to one of their two children. Their daughter Candice has become a very popular actress in television and film.