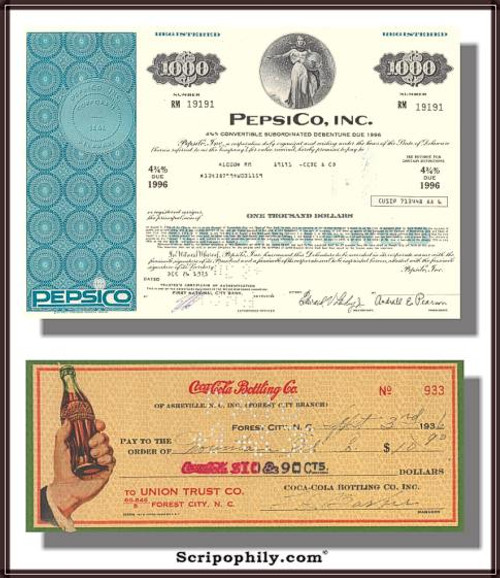 1. Beautifully engraved EARLY check from the Coca Cola Bottling Company of Piqua, Ohio issued in the 1930's. This historic document and has green border around it with a vignette of a hand hold a bottle of Coke. This check is hand signed and is over 65 years old.

Check Vignette
2. Beautifully engraved Certificate from the PepsiCo, Inc. issued in the 1970's. This historic document was printed by the Security Columbian Banknote Company and has an ornate border around it with a vignette of an allegorical woman holding a globe. This item has the printed signatures of the company's officers and is over 25 years old. 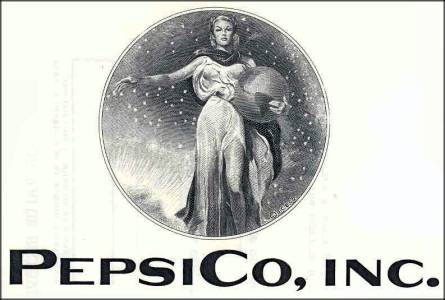 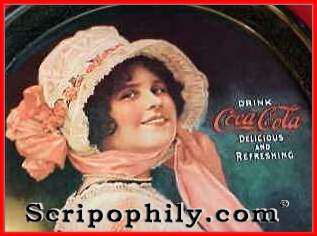 In 1886 Dr. John Stith Pemberton first introduces Coca-Cola in Atlanta, Georgia. The pharmacist concocted a caramel-colored syrup in a three-legged brass kettle in his backyard. He first "distributes" Coca-Cola by carrying it in a jug down the street to Jacobs' Pharmacy. For five cents, consumers can enjoy a glass of Coca-Cola at the soda fountain. This year, sales of Coca-Cola average nine drinks per day. In 1891 Atlanta entrepreneur Asa G. Candler acquires complete ownership of the Coca-Cola business for $2,300. Within four years, his merchandising flair helps expand consumption of Coca-Cola to every part of the nation. By 1914, Candler had acquired a fortune of some $50 million. Baseball hall of famer Ty Cobb, a Georgia native, was another early investor in the company. In 1893 The trademark "Coca-Cola" name and script are registered with the U.S. Patent and Trademark Office. Dr. Pemberton's partner and bookkeeper, Frank M. Robinson, suggested the name and penned "Coca-Cola" in the unique flowing script that is famous worldwide today. Mr. Robinson thought "the two C's would look well in advertising." Coca-Cola" was first sold for 5¢ a glass as a soda fountain drink at Jacob's Pharmacy in Atlanta, Georgia. In 1894, Joseph A. Biedenharn, owner of the Biedenharn Candy Company in Vicksburg, Mississippi, first bottled "Coca Cola." By 1903, the use of cocaine was controversial and "Coca-Cola" decided to use only "spent coca leaves." It also stopped advertising "Coca-Cola" as a cure for headaches and other ills. In 1929, after his death, Griggs Candler's family sold the interest in "Coca-Cola" to a group of businessmen led by Ernest Woodruff for $25 million. Woodruff was appointed president of "Coca-Cola" on April 28, 1923 and stayed on the job until 1955. Pepsi Overview In 1965 PepsiCo, Inc. is founded by Donald M. Kendall, president and chief executive officer of Pepsi-Cola and Herman W. Lay, chairman and chief executive officer of Frito-Lay, through the merger of the two companies. Pepsi-Cola was created in the late 1890s by Caleb Bradham, a New Bern, N.C. pharmacist. Frito-Lay, Inc. was formed by the 1961 merger of the Frito Company, founded by Elmer Doolin in 1932, and the H. W. Lay Company, founded by Herman W. Lay, also in 1932. Herman Lay is chairman of the Board of Directors of the new company; Donald M. Kendall is president and chief executive officer. The new company reports sales of $510 million and has 19,000 employees. 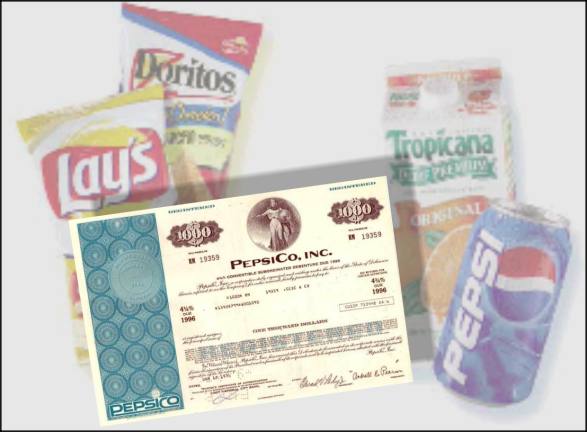