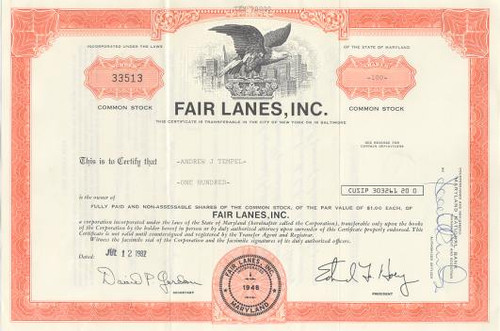 Beautifully engraved certificate from the Fair Lanes, Inc. issued in 1982-83. This historic document was printed by the Security-Columbian Banknote Company and has an ornate border around it with a vignette of an eagle perched upon a pillar with a city scape in the background. This item has the printed signatures of the company's president and secretary and is over 17 years old. Fair Lanes, Inc. ("Fair Lanes") operated 106 bowling centers in the United States and Puerto Rico. On June 22, 1994, Fair Lanes and its parent Fair Lanes Entertainment, Inc. ("FLE"), each filed voluntary petitions for relief under Chapter 11 of Title 11 of the United States Code ("Chapter 11"). Fair Lanes' operating subsidiaries did not file for Chapter 11 protection. At the time of filing, liabilities subject to compromise consisted of Fair Lanes' $138,000 senior secured notes, which were publicly traded, and FLE's debt in the form of $48,000 variable rate and zero coupon notes (these notes were also publicly traded). The Bankruptcy Court approved the plan of reorganization effective September 29, 1994 whereby the holders of FLE's $48,000 of notes received approximately 6% of Fair Lanes' equity and the holders of Fair Lanes' $138,000 of notes received approximatey 94% of Fair Lanes' equity and $90,350 of new 9.5% notes. The former Fair Lanes' equityholders' interests were eliminated as a result of the reorganization. Through September 29, 1994, AMF's shareholders had purchased old Fair Lanes' and FLE's notes which resulted in the AMF shareholders obtaining approximately 56% of the voting shares of Fair Lanes. One other shareholder held approximately 35% of the new stock and the remaining 9% was held by other shareholders. The AMF shareholders were able to acquire the shares held by the 35% shareholder on January 7, 1996 and an additional 2% of the shares from other shareholders in open market purchases. On February 7, 1996, the AMF shareholders affected a cash merger and bought out the remaining shareholders.