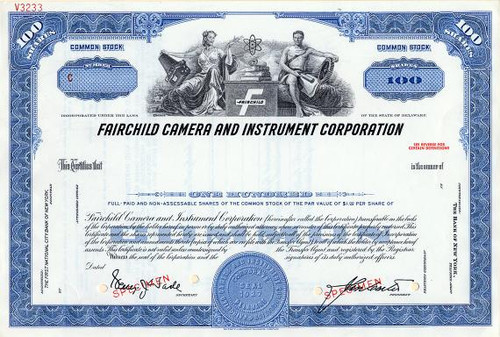 Beautifully engraved certificate from the Fairchild Camera and Instrument Corporation . This historic document was printed by Security-Columbian Banknote Company and has an ornate border around it with a vignette of two allegorical men. This item has the signatures of the Company's President and Secretary.

Certificate Vignette
Fairchild Semiconductor was founded in 1957 when Sherman Mills Fairchild, founder of Fairchild Camera and Instrument Corp., helped a group of scientists set up a transistor manufacturing plant in what is now known as Silicon Valley (Santa Clara Valley, California). Two of its key employees, Robert Noyce and Gordon Moore, as well as several others, eventually left to form Intel in 1968. The Fairchild conglomerate's major divisions were the semiconductor section in Mountain View, California and a commercial products division a few miles north in Palo Alto. History from Wikipedia and OldCompanyResearch.com (old stock certificate research service). Sherman Mills Fairchild was a man of many talents-and even more interests. Founder of the Fairchild Camera & Instrument Corporation, and of Fairchild Engine & Airplane Corporation, he became a pioneer in the fields of photography, aviation, and sound engineering. Fairchild was not only an indefatigable investor in those fields, but his inquiring mind also led to patents on such disparate products as engraving mechanisms and carriers for fruit picking (the latter his last patent at age 73). In his lifetime he was granted a total of thirty patents. He designed his own indoor tennis court. He was a gourmet cook. He was a voracious reader and subscribed regularly to 150 trade and technical journals. He was a partner in a music publishing firm. Fairchild's curiosity and inventive mind were obvious early and they were encouraged by his father, who was a remarkable man himself. The elder Fairchild started out as a printer's devil, later financed the manufacture of one of the earliest rotary newspaper printing presses in the U.S., and was one of the founders-and first chairman-of International Business Machine (IBM). George Fairchild also served for twelve years in the U.S. House of Representatives. Sherman, an only child, was born in the small upstate New York town of Oneonta, where his father manufactured time clocks and adding machines (his company and two others later becoming IBM). He entered Harvard in 1915, but his education was interrupted after a year by a threat of tuberculosis-though not before he had invented a flash camera to take pictures for the Harvard Illustrated, of which he was managing editor. Fairchild then moved to Arizona for his health; his interest in cameras continued and he enrolled at the University of Arizona, where he studied aerial photography and took machine shop courses. At the end of the war he came to New York City to enroll at Columbia University. With his father's encouragement and financial backing, Sherman left Columbia and started a company to build aerial cameras. He began applying his cameras to map making and set up an aerial survey company in 1924. Through the survey work he became interested in aircraft manufacture, because no existing airplanes seemed suitable for map making and charting. His first plane, finished in 1927, had two important technological innovations-an enclosed cabin and folding wings. Thousands of Fairchild airplanes subsequently were built; after World War II his airplanes became widely used as the smaller ``feeder'' planes for commercial carriers, both in the United States and abroad. In 1931 he established the Fairchild Recording Equipment Corporation to carry out his theories of sound recording, and he continued his camera interests by working out a front projection background system. Even in his later years, he continued developing new ideas, including fusing, safety, and arming devices for missiles, teletypesetter and phototypesetter equipment, and offset newspaper presses. Of equal importance to his inventions was his ability to carry through these inventions to creative and lasting organizations that brought the fruits of innovation into public use. In the early 1950's, Fairchild, in an interview, stated,``You might call me a promoter... these days I do little inventing. I do think I know when something is good in the crude stage... how to talk to the man responsible for the idea, and how to get people together to do something about it commercially.'' By this point he had become known as one of the preeminent venture capitalists in the country (and was so recognized by cover stories in, among others, Time and Business Week; the former called him ``the epitome of the new scientist-businessman-inventor.'') Fairchild was honored by his scientific and technological colleagues with fellowships in the Institute of Aeronautical Sciences and in the Royal Aeronautical Society. The above story was written by Cal Tech University.