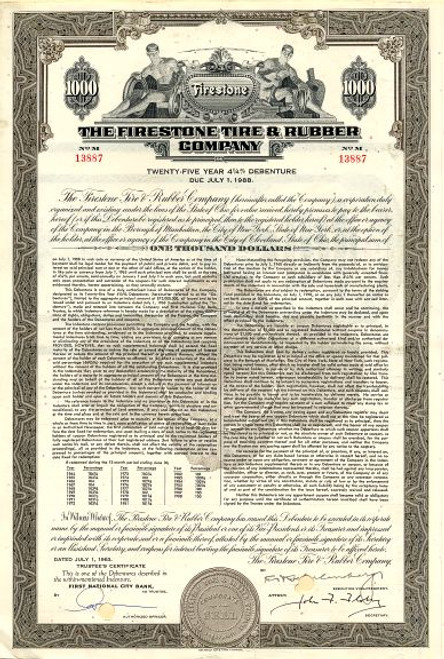 Beautifully engraved certificate from the Firestone Tire & Rubber Company issued in 1963. This historic document was printed by the American Banknote Company and has an ornate border around it with a vignette of allegorical men next to the company's logo. This item is hand signed by the Company's Officers and is over 45 years old. 19 coupons attached on right side. Punched cancelled.

Certificate Vignette
Harvey S. Firestone founded the Firestone Tire and Rubber Company in July, 1900. Only six months after he moved to Akron, Ohio, he had established himself as a powerful, innovative force in Rubber City, the center of the tire industry. Manufacturers were putting rubber tires on bicycles and carriages, and later the automobile. But Harvey didn't stop there - he had something else in mind. He dreamt of putting rubber tires on farm tractors. His vision was to make work for farmers more efficient and more comfortable - and save them time and money. Harvey's vision materialized in 1932 when he produced the original tractor tire.