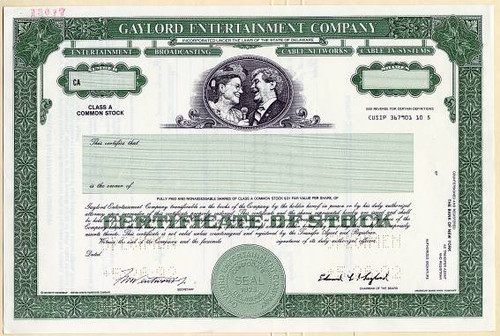 Beautiful certificate from the Gaylord Entertainment Company printed in 1992. This historic document was printed by the United States Banknote Company and has an ornate border around it with a vignette the Grand Ole Opry. This item has the printed signatures of the Company's Chairman of the Board, Edward Lewis Gaylord and Secretary, and is over 26 years old.

Certificate Vignette
The Gaylord Entertainment Company (NYSE: GET) operates a number of hotel, resort, and media companies that were built by Edward Gaylord. Facilities owned include: Gaylord Hotels Gaylord Opryland Resort & Convention Center, in Nashville, Tennessee Gaylord Palms Resort & Convention Center, near Orlando, Florida Gaylord Texan Resort & Convention Center in Grapevine, TX Dallas/Fort Worth area. Gaylord National Harbor Resort & Convention Center, at National Harbor, Maryland Grand Ole Opry WSM-AM Ryman Auditorium Wildhorse Saloon The General Jackson Showboat Corporate Magic, Inc. (special events production company) Previously owned properties include: WKY Radio, Oklahoma City, OK Opryland USA theme park ResortQuest International, Inc. Bass Pro Shops' Outdoor World (minority interest) Acuff-Rose Music The Nashville Network Country Music Television Nashville Predators (minority interest) Word Entertainment Z Music Television (Christian music video channel) It was previously a subsidiary of the Oklahoma City-based Oklahoma Publishing Company Its name still appeared on the Gaylord Entertainment Center in Nashville (home of the Nashville Predators until March 16, 2007, though the naming rights agreement has been terminated. The facility reverted its name back to the original moniker of the Nashville Arena and is now known as Sommet Center. Gaylord Entertainment also produced the long-running comedy/variety series Hee Haw (initially out of the studios of WTVF) and distributed the program over their television stations and in syndication. Edward Lewis Gaylord (May 28, 1919April 27, 2003) was a billionaire businessman and media mogul who built the Gaylord Entertainment Company empire that included The Oklahoman newspaper/ Oklahoma Publishing Co., Gaylord Hotels, the Nashville Network TV Channel (later renamed "SpikeTV" after being sold off); the Grand Ole Opry, and the Country Music Television Channel (CMT)as well as now defunct and bankrupt airline "Western Pacific" Gaylord was the leader of the family which inherited the major Oklahoma City metro newspaper, Daily Oklahoman and other family assets worth $50 million in 1974. Gaylord graduated from Stanford University with a degree in business and continued his studies at Harvard Business School, but World War II interrupted his education. Gaylord increased the family fortune to $2 billion by the time he died in 2003. He also purchased the Grand Ole Opry in Nashville, Tennessee, when it was in dire financial straits and kept it operating. He created The Nashville Network TV Channel, as well as Country Music Television, or CMT, which is similar to MTV, and owned Hee Haw a long running country and western variety show. The Daily Oklahoman, renamed The Oklahoman, still remains in the family; the editorial tone of the paper now is more accurately described as mostly economic conservative, not unlike "The Wall Street Journal"[citation needed]. Gaylord's daughter, publisher Christy Gaylord Everest, now manages the property. Everest, assisted by her sister, Louise Gaylord Bennett, have updated the look of the paper, and have presented opposing viewpoints of issues of public concern. During the management by Edward Gaylord, the newspaper has been regularly accused of having an ultra conservative Republican /conservative bias in both its news coverage and particularly on its editorial pages. The January/February 1999 issue of the Columbia Journalism Review contained an article, titled "The Worst Newspaper in America," which made a case for that designation. The Gaylord family of Oklahoma City helped found the world-famous National Cowboy & Western Heritage Museum in Oklahoma City and has given the University of Oklahoma contributions totalling over $50 million in the last three decades, and founded the Gaylord College of Journalism and Mass Communication. Edward Gaylord and his family were actively involved in the formation of the now-defunct and bankrupt Western Pacific Airlines. Recently, the home field of the University of Oklahoma Sooners football team was renamed Gaylord Family Oklahoma Memorial Stadium due to their contributions.[citation needed] History from Wikipedia and OldCompany.com (old stock certificate research service). About Specimen Certificates Specimen Certificates are actual certificates that have never been issued. They were usually kept by the printers in their permanent archives as their only example of a particular certificate. Sometimes you will see a hand stamp on the certificate that says "Do not remove from file". Specimens were also used to show prospective clients different types of certificate designs that were available. Specimen certificates are usually much scarcer than issued certificates. In fact, many times they are the only way to get a certificate for a particular company because the issued certificates were redeemed and destroyed. In a few instances, Specimen certificates were made for a company but were never used because a different design was chosen by the company. These certificates are normally stamped "Specimen" or they have small holes spelling the word specimen. Most of the time they don't have a serial number, or they have a serial number of 00000. This is an exciting sector of the hobby that has grown in popularity over the past several years.