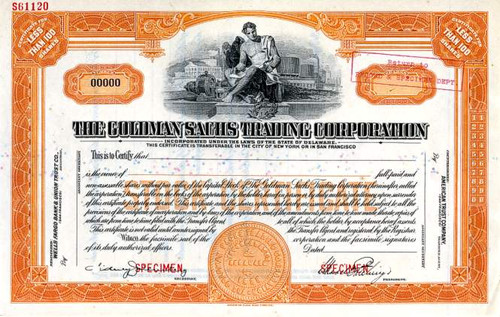 Beautifully engraved RARE Specimen certificate from the Goldman Sachs Trading Corporation printed in 1928. This historic document was printed by the American Banknote Company and has an ornate border around it with a vignette of an allegorical man sitting next to a generator in front of a manufacturing facility. This item has the printed signatures of the Company's President, Waddill Catchings and Secretary, Sidney J. Weinberg and is over 82 years old. This is only the second time we have had this certificate for sale and we only have one.

Certificate Vignette
On December 4, 1928, Goldman Sachs launched the Goldman Sachs Trading Corp. a closed-end fund with characteristics similar to that of a Ponzi scheme. The fund failed as a result of the Stock Market Crash of 1929, hurting the firm's reputation for several years afterward. Of this case and others like Blue Ridge Corporation and Shenandoah Corporation John Kenneth Galbraith wrote: The Autumn of 1929 was, perhaps, the first occasion when men succeeded on a large scale in swindling themselves. Goldman Sachs Trading Corporation's stock hit a high of $326 in 1929 and fell to a low of $1.75 in 1932. In 1929, the following prospectus information was written about the company: Goldman Sachs Trading Corporation was incorporated in Delaware, Dec. 4, 1928, to buy, sell, trade in or hold stocks and securities of any kind, to participate in syndicates and underwritings and to make such other investments or to undertake such other activities as the management shall deem advisable. Essentially the Goldman Sachs Trading Corporation was an Investment Pool (Mutual Fund) that was aggressively marketed to investors during the late 1920's and cratered during the depression. OFFICERS: Waddill Catchings,-Pres.; Ralph Jonas, Chairman of the Executive Comm.; Arthur Sachs, Vice-Pres.; S. J. Weinberg, Sec. and Treas.; S. W. Anderson, Asst. Sec.; H. V. Bail, Asst. Treas. DIRECTORS: Waddill Catchings, Ralph Jonas, Arthur Sachs, S. J. Weinberg, H. J. Sachs, W. E. Sachs, H. S. Bowers. ANNUAL MEETING: Third Wednesday in March. GENERAL COUNSEL: Sullivan & Cromwell. OFFICE: 67 Wall Street, New York. MANAGEMENT AND COMPENSATION: The corporation has entered into a management contract with Goldman, Sachs & Co. under the terms of which that firm will receive no compensation unless the corporation earns annually 8% on its capital and surplus as of the beginning of the year plus appropriate adjustments for capital added during the year; in any year in which the realized net profits exceed this 8%, the firm will be entitled to receive an amount equal to 20% of the net profits but only to the extent that the payment thereof will not reduce the net profits below this 8%. The requirement for the annual earning of net profits of 8% shall be cumulative, so that if, in any year, the corporation shall fail to have net earnings of that amount the deficiency must be made good in subsequent years before the firm will be entitled to receive compensation. The stockholders, by a majority vote, may terminate the management contract at any time. If any director shall be elected without approval of Goldman, Sachs & Co., the management contract may be terminated by Goldman, Sachs & Co. Upon a termination of the management contract, the corporation shall, at the request of Goldman, Sachs & .Co., change its name so as to eliminate all reference to Goldman, Sachs & Co. CAPITAL STOCK: 1. Goldman Sachs Trading Corp. capital stock: Authorized, 10,000,000 shares (increased from 2,- 500,000 shares Feb. 21, 1929) ; outstanding, 4,500,000 shares; no par. Of the 4,500,000 shares outstanding, 1,000,000 shares were underwritten by Goldman, Sachs & Co. in Dec., 1928, 125,000 shares were subsequently sold, 1,125,000 distributed as a stock dividend and 2,250,000 issued to acquire the Financial and Industrial Securities Corp. on basis of 1-11/34 shares of Goldman, Sachs Trading Corp. for 1 share of Financial and Industrial Securities Corp. Has no preemptive subscription rights. Listed on New York Curb. Paid 100% stock dividend Feb. 25, 1929, to holders of record Feb. 15, 1929. Also a special dividend of $2 on 2,250,000 shares (to equalize assets preceding acquisition of Financial and Industrial Securities Corp.) paid March 15, 1929 to holders of record March 1, 1929. Paid quarterly stock dividend of 12% April 1, 1929 to stock of record March 22, 1929. Offered (1,000,000 shares) at $104 per · share in Dec., 1928, by Goldman, Sachs & Co., New York. TRANSFER AGENTS: Guaranty Trust Co., New York. American Trust Company, San Francisco. REGISTRAR: Manufacturers Trust Co., New York. Wells Fargo Bank & Union Trust Company, San Francisco. History from OldCompany.com (old stock certificate research service). About Specimen Certificates Specimen Certificates are actual certificates that have never been issued. They were usually kept by the printers in their permanent archives as their only example of a particular certificate. Sometimes you will see a hand stamp on the certificate that says "Do not remove from file". Specimens were also used to show prospective clients different types of certificate designs that were available. Specimen certificates are usually much scarcer than issued certificates. In fact, many times they are the only way to get a certificate for a particular company because the issued certificates were redeemed and destroyed. In a few instances, Specimen certificates were made for a company but were never used because a different design was chosen by the company. These certificates are normally stamped "Specimen" or they have small holes spelling the word specimen. Most of the time they don't have a serial number, or they have a serial number of 00000. This is an exciting sector of the hobby that has grown in popularity over the past several years.