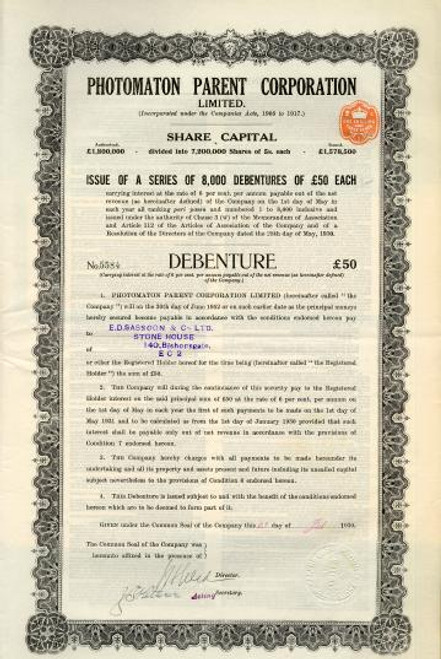 Beautiful certificate from the Photomaton Parent Corporation issued in 1930. This historic document has an ornate border around it with an embossed corporate seal. This item is hand signed by the Company's officers and is over 79 years old. Photomaton Parent Corporation was granted a Patent in Great Britain for an invention related to improvement in photography apparatuses. Photomaton Parent Corporation Limited was set up by Clarence Hatry in 1928 to operate photograph machines in hundreds of public places such as railway stations, amusement parks, etc. Problems started in 1929 with Hatry's manipulation of share prices and some fraudulent issuing of municipal stocks by one of his companies. The events of 1929 caught up with Hatry and he was convicted for fraud and sentenced to 14 years in prison. The article below is from the "Time Magazine dated " Dec. 30, 1929 Morgan, Carnegie, Astor, Mellon-- Every U. S. schoolboy knows the names of dozens of U. S. financiers who have been spectacular in their successes, but for brilliant colossal failures the palm must go to Britain. Boston had its Ponzi, who failed in 1920 for about $3,000,000. The agile Jay Gould sold $5,000,000 worth of fraudulent stock in the Erie Railroad. But in 1892 Britain's Jabez Spencer Balfour wiped out $50,000,000 with his disastrous Liberator Building Society. In 1896, $7,500,000 worth of other peoples money vanished in the hands of London's plausible Ernest Terah Hooley. In 1900 one Whitaker Wright, suave swindler, organized London & Globe Finance Corp., lost ten million dollars a year for three years, swallowed poison in court and died in the dock. In 1910 the great Charing Cross Bank failed, under the able mismanagement of Alfred William Carpenter, for $8,500,000. In 1922 the British Gerald Lee Bevan sank his City Equitable Fire Insurance Co. to the tune of $10,000,000 and went to jail. On Swindler Sevan's release a few months ago he borrowed $125,000 from an expansive, sharp-eyed little man who owned the only mansion in London with a roof-garden swimming pool, Clarence Charles Hatry. Last week the nonpareil of All Failures, Clarence Hatry, stood before the preliminary investigating committee in London's Guildhall charged with forgery and fraud. Reporters and financial gossipers crowded the room to hear famed Accountant Sir Gilbert Garnsey tell just how much money Swindler Hatry did lose, to try to learn what became of the money. The outline career of the nonpareil Hatry is simple. Beginning life as an insurance clerk he put in four busy war years profiteering. In some curious manner, three successive bankruptcies left him successively richer. At the beginning of the year investors flocked to the following Hatry group: General Securities Ltd. (of which the august Marquis of Winchester is chairman); Austin Friars Trust, Ltd.; Dundee Trust; Oak Investment Corp.; Associated Automatic Machines Corp.; Drapery Trust; Retail Trade Corp.; Photomaton Parent Corp.; and Far Eastern Photomaton Corp. (not connected with the U. S. exploiters of the same coin-in-the-slot photograph machine). Suddenly the London Stock Exchange committee suspended all shares of the Hatry group from listing on 'change. Followed the crash (TIME, Oct. 21). Investors were estimated to have lost anywhere from $30,000,000 to $100,000,000. Clarence Hatry, who lived in a state of Hollywood magnificence and once owned the Westward, largest yacht in British water, was hauled off to jail, charged with the more definite crime of obtaining a million dollar loan on forged bearer scrip certificates of City of Wakefield 4½% stock. In court last week Accountant Sir Gilbert Garnsey, who has buried his patrician nose in the books of the Hatry companies for many weeks, announced that the six principal companies had liabilities of more than $143,000,000. There were some assets, but apparently $67,500,000 was irretrievably lost, an all time record for British failures. "Unsecured creditors are likely to receive very little," said Sir Gilbert in measured tones, "while there will certainly be nothing at all for the shareholders." Said Hatry the Nonpareil, his voice shaken with emotion: "When I saw that matters were getting serious, I pledged every penny I possessed, my reputation, and maybe my liberty to avert what I knew would otherwise be a terrible crash. I took a grave risk at a time when I could easily have let things go and walked off a free man. . . . By taking this risk now my name has become a byword and I am irretrievably and irreparably ruined." As the defendant was taken back to his cell in Brixton Prison, held without bail, reporters were still unable to discover just what Hatry the Nonpareil had done with the 67 million missing dollars. History from Wikipeida and OldCompanyResearch.com.