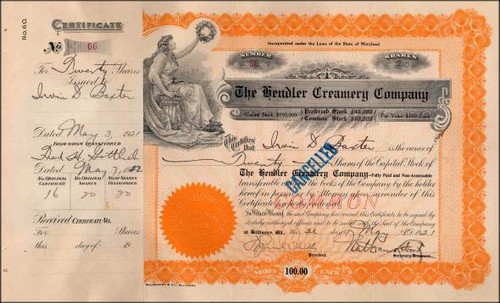 Beautifully Scarce certificate from the Hendler Creamery Company issued no later than 1922. The company was headquartered in Baltimore, Maryland. This historic document has an ornate border around it with a vignette of an allegorical woman sitting with a shield and holding a wreath up in the air. This item is hand signed by the Company's President ( L. Manuel Hendler ) and Secretary and is over 96 years old. 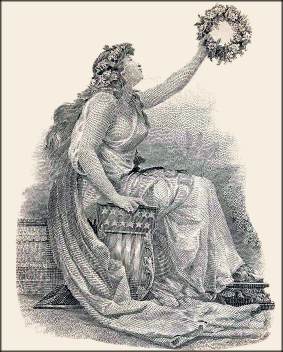 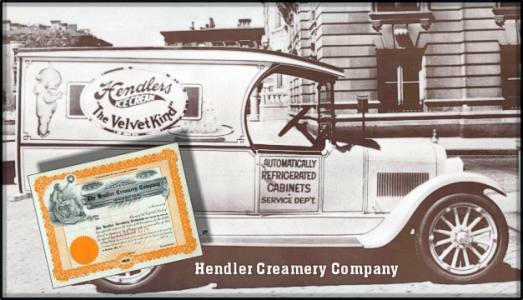 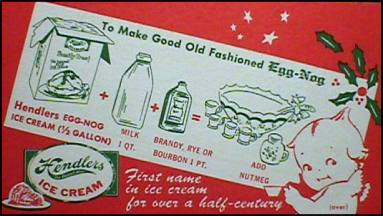 Early Hendler Ice Cream Ad
The Hendler Creamery Company made the famous Hendler Ice Cream. They were one of the most successful ice cream companies in the U.S. Hendler's would eventually be bought by the Borden Company prior to 1932. Information about the Hendler family items can be found at the Jewish Historic Society in Baltimore since they were one of the most successful Jewish owned businesses ever in that area. Generations of Baltimoreans grew up eating Hendler's ice cream, which was sold from 1905 through the late 1960s. Hendler's was billed as "The Velvet Kind"-- was so ubiquitous in its day that many soda-fountain customers probably never knew other brands existed. Hendler's big sales jump occurred in 1912, when he established a state-of-the-art ice cream factory on East Baltimore Street. There the chilly confection flowed forth without ever being touched by human hands (a far cry from Fussell's pre-refrigeration plant, with its manually cranked machines and mountains of ice). Hendler's company dealt mainly in the big three--vanilla, chocolate, and strawberry--but the public also developed a hankering for the exotic. Hendler's ice cream scientists created dozens of curious flavors, including ginger for the Hutzler's tearoom and a unique tomato sherbet for the Southern Hotel (where it was served as a side dish rather than a dessert). The company's rum-soaked egg-nog ice cream was a big seller around the holidays. Ice cream was very good to Hendler, who lived in a white Reservoir Hill mansion local wags took to calling "Vanilla on the Lake." But like Fussell's before it, his company was eventually absorbed by a larger, national brand. The only places the Hendler name can be seen these days are antique shops, where the company's ice cream paraphernalia can occasionally be found.