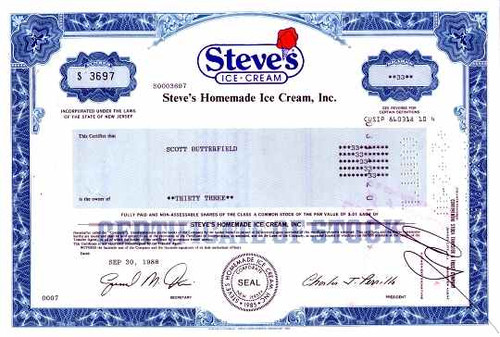 Beautifully engraved certificate from the Steve's Homemade Ice Cream, Inc. issued in 1986-1990. This historic document was printed by the Security-Columbian Banknote Company and has an ornate border around it with a vignette of an ice cream cone. This item has the printed signatures of the company's president and secretary and is over 11 years old. Steve's Homemade Ice Cream, Inc was incorporated in New Jersey on September 27, 1985 and commenced operations on December 23, 1985 as . In July 1995, the Company changed its name to INTEGRATED BRANDS INC. to more appropriately reflect the breadth of the Company's business. The Company owns, operates, develops and franchises Swensen's restaurants and ice cream stores in four formats: food service, limited food service, ice cream only stores and specialty stores. Steve's franchises are operated primarily as dessert only stores. Steve's and Swensen's stores are also offered as "triple trademark" franchises featuring independent sections of Steve's or Swensen's ice cream, David's cookies and Heidi's frozen Yogurt.