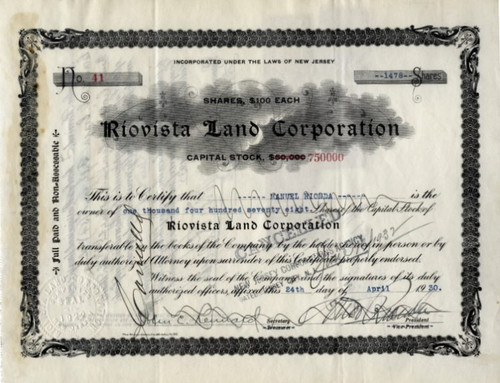 Beautifully printed stock certificate #49 from the Riovista Land Corporation issued in 1934. This historic document was printed by the Broun Green Company and has an ornate border around it with a vignette of the company's name in clouds. This item has the hand signatures of the Company's V. President and Secretary. This certificate was issued to Manuel Rionda and endorsed by him on the back.

Certificate Vignette
Manuel Rionda (1854-1943), immigrated from Spain to Cuba when he was 16. He become the major player in the international sugar trade. Manuel Rionda founded the Czarnikow Rionda Company in New York and the Cuban Trading Company. In 1904, Manuel Rionda bought 13 acres and by the time of his death his estate had grown to over 200 acres. The property was owned by the Riovista Land Corporation which was incorporated in 1922. The property ran from the middle of Cresskill to the edge of the cliffs along the Palisades. It included a man made lake, as well as a large gothic medieval looking stone clock tower he constructed as the centerpiece of the Rio Vista estate. The path to the tower was surrounded by cedars and the tower had an iron elevator and was flanked by a library and a chapel. As the story goes, Manuel Rionda built the tower so his wife Harriet could see New York without having to leave the property. Supposedly, his wife was looking out from the top of the tower and saw her husband with another woman. She was so upset, she jumped to her death down the center of the tower in 1922. Manuel was so upset that he stopped all the work on the tower because it was for his wife and now his wife was dead. The tower is still haunted by his wife according to local folklore and is known as the "Devil's Tower". Harriet was interred in a mausoleum on the property. 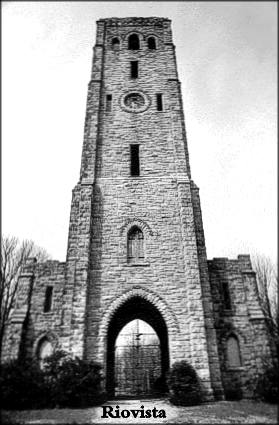