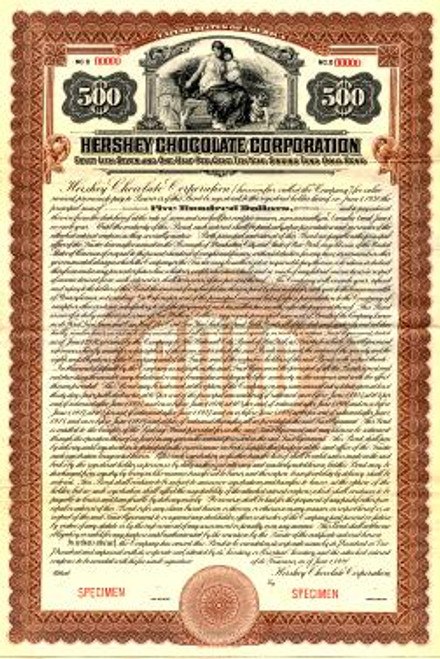 Beautifully engraved RARE Specimen Gold Bond Certificate from the Hershey Chocolate Corporation dated 1920. This historic document was printed by American Bank Note Company and has an ornate border around it with a vignette of women with two children feeding a white dove. This item is over 86 years old. 40 coupons attached on right side of bond. 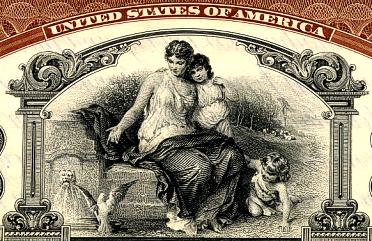 Certificate Vignette
Milton S. Hershey, the founder of the giant chocolate manufacturing firm bearing his name, tried a number of different ventures before eventually succeeding in the chocolate business. In his early years, Milton enjoyed his apprenticeship as a candy maker for Joseph H. Royer, a confectioner. At the age of 19, Hershey decided to go into the candy business for himself. His venture in Philadelphia failed, as did efforts with his father. Back in Lancaster, Hershey began manufacturing caramels. The business quickly expanded and in 1900 he sold his company for $1 million. He used the money for a construction of a chocolate processing plant in Derry Township, about 15 miles east of Harrisburg. Within 10 years, the company was making more money than they could spend. In 1909, Hershey built a home for unfortunate boys and used 486 acres of land to build the Hershey Industrial School. Later on, Hershey also built a community building containing two theatres, a dining room and a cafeteria, a gymnasium, swimming pool, bowling alley , fencing and boxing room. Hershey also constructed a 7200 seat Hershey Sports Arena in 1936, and the Hershey Stadium was finished in 1939. Later on Hershey constructed Hershey World, a simulated chocolate plant, Hershey Park, a theme park, the Hershey Museum of American Life and the Hershey Gardens. In the 1920s, Milton Hershey decided to reorganize the company. The Hershey Chocolate company was dissolved, and three separate companies were organized: the Hershey Chocolate Corporation, the Hershey Corporation, and the Hershey Estates. All three of these organizations had different roles in the Hershey world. The Hershey Chocolate Corporation controlled all the chocolate properties. The Hershey Corporation was responsible for the Cuban sugar interests and the Hershey Estates was responsible for the various businesses and municipal services in the town of Hershey. About Specimens Specimen Certificates are actual certificates that have never been issued. They were usually kept by the printers in their permanent archives as their only example of a particular certificate. Sometimes you will see a hand stamp on the certificate that says "Do not remove from file". Specimens were also used to show prospective clients different types of certificate designs that were available. Specimen certificates are usually much scarcer than issued certificates. In fact, many times they are the only way to get a certificate for a particular company because the issued certificates were redeemed and destroyed. In a few instances, Specimen certificates we made for a company but were never used because a different design was chosen by the company. These certificates are normally stamped "Specimen" or they have small holes spelling the word specimen. Most of the time they don't have a serial number, or they have a serial number of 00000. This is an exciting sector of the hobby that grown in popularity and realized nice appreciation in value over the past several years.