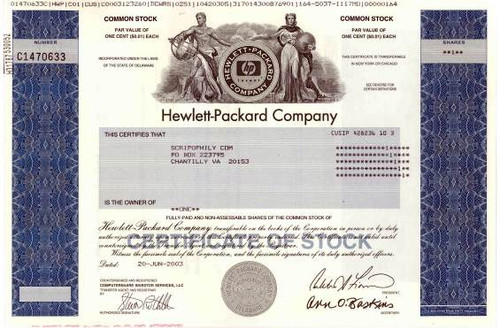 Beautifully engraved certificate from the Hewlett Packard Company . This historic document was printed by the American Banknote Company and has a vignette of two allegorical people holding different globes and standing next to the company logo. This item has the printed signatures of the Company's President, Carly Fiorina and Secretary, Ann O. Baskins. 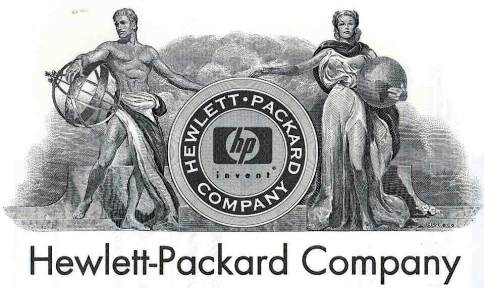 Certificate Vignette
Cara Carleton "Carly" Fiorina (nÃ©e Sneed; September 6, 1954) is a former business executive, and current Chair of the non-profit philanthropic organization Good360. Starting in 1980, Fiorina rose through the ranks to become an executive at AT&T and its equipment and technology spinoff, Lucent. As chief executive officer of Hewlett-Packard (HP) from 1999 to 2005, she was the first woman to lead one of the top twenty U.S. companies. The Hewlett-Packard Company (HP) is an American global information technology company headquartered in Palo Alto, California, United States. It develops and provides a wide variety of hardware components as well as software and related services to consumers, small- and medium-sized businesses (SMBs) and large enterprises, including customers in the government, health and education sectors. The company was founded in a one-car garage in Palo Alto by William "Bill" Redington Hewlett and David "Dave" Packard starting with a line of electronic test equipment. HP was the world's leading PC manufacturer from 2007 to Q2 2013, after which Lenovo remained ranked ahead of HP. It specializes in developing and manufacturing computing, data storage, and networking hardware, designing software and delivering services. Major product lines include personal computing devices, enterprise and industry standard servers, related storage devices, networking products, software and a diverse range of printers and other imaging products. HP markets its products to households, small- to medium-sized businesses and enterprises directly as well as via online distribution, consumer-electronics and office-supply retailers, software partners and major technology vendors. HP also has services and consulting business around its products and partner products. Hewlett-Packard company events have included the spin-off of its electronic and bio-analytical measurement instruments part of its business as Agilent Technologies in 1999, its merger with Compaq in 2002, the sponsor of Mission: Space in 2003, and the acquisition of EDS in 2008, which led to combined revenues of $118.4 billion in 2008 and a Fortune 500 ranking of 9 in 2009. In November 2009, HP announced the acquisition of 3Com, with the deal closing on April 12, 2010.[6] On April 28, 2010, HP announced the buyout of Palm, Inc. for $1.2 billion.[7] On September 2, 2010, HP won its bidding war for 3PAR with a $33 a share offer ($2.07 billion), which Dell declined to match. On October 6, 2014, Hewlett-Packard announced plans to split the PC and printers business from its enterprise products and services business. The split is expected to close by October 2015 and will result in two publicly traded companies: Hewlett Packard Enterprise and HP Inc. History from Wikipedia and OldCompany.com