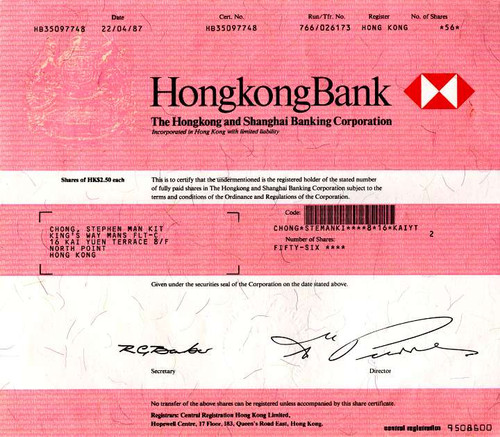 Beautiful printed certificate from the Hongkong Bank issued no later than 1990. This historic document has a vignette of the company's logo has watermarks in Chinese. It also has an image of the British Crown in the upper left corner. This certificate has the printed signatures of the Company's officers and is over 23 years old. 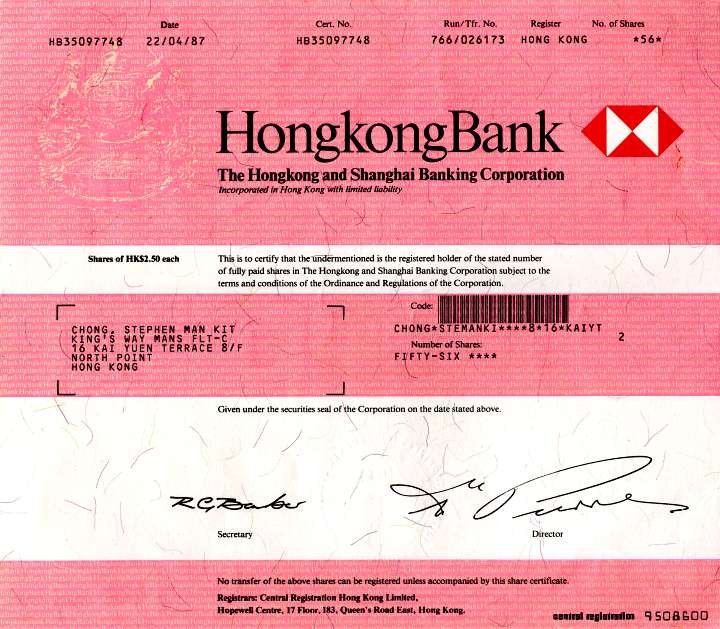 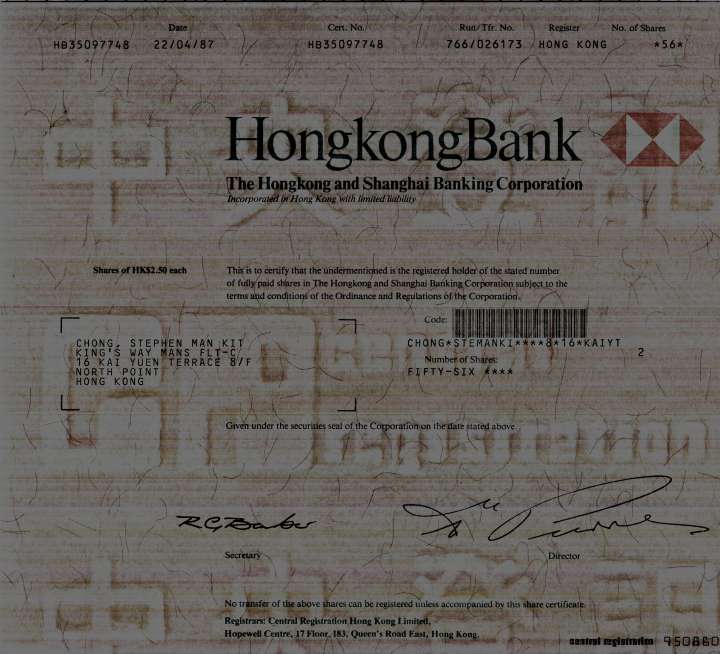 Certificate Watermark
The following is from the company's Press information: The HSBC Group has an international pedigree which is unique. Many of its principal companies opened for business over a century ago and they have a history rich in variety and achievement. Foundation and growth The HSBC Group is named after its founding member, The Hongkong and Shanghai Banking Corporation Limited, which was established in 1865 in Hong Kong and Shanghai to finance the growing trade between China and Europe. The inspiration behind the founding of the Bank was Thomas Sutherland, a Scot who was then working as the Hong Kong Superintendent of the Peninsular and Oriental Steam Navigation Company. He realised that there was considerable demand for local banking facilities both in Hong Kong and along the China coast and he helped to establish the Bank in March 1865. Then, as now, the Bank's headquarters were at 1 Queen's Road Central in Hong Kong and a branch was opened one month later in Shanghai. Throughout the late nineteenth and the early twentieth centuries, the Bank established a network of agencies and branches based mainly in China and South East Asia but also with representation in the Indian sub-continent, Japan, Europe and North America. In many of its branches the Bank was the pioneer of modern banking practices. From the outset, trade finance was a strong feature of the Bank's business with bullion, exchange and merchant banking also playing an important part. Additionally, the Bank issued notes in many countries throughout the Far East. During the Second World War the Bank was forced to close many branches and its head office was temporarily moved to London. However, after the war the Bank played a key role in the reconstruction of the Hong Kong economy and began to further diversify the geographical spread of the Bank. The making of the modern HSBC Group The post-war political and economic changes in the world forced the Bank to analyse its strategy for continued growth in the 1950s. The Bank diversified both its business and its geographical spread through acquisitions and alliances. However, it remained committed to its historical markets and played an important part in the reconstruction of Hong Kong where its branch network continued to expand. In 1959 the bank completed two important purchases, those of The British Bank of the Middle East (now HSBC Bank Middle East) and the Mercantile Bank. The British Bank of the Middle East had begun life as the Imperial Bank of Persia in 1889 but throughout the 1940s and 1950s had extended its sphere of operations and pioneered banking in the Gulf states. The history of Mercantile Bank stretched back to 1853 - the year it was founded in Bombay (now Mumbai) - and by the 1950s it had a strong identity within Indian and other Asian markets. In 1965 the Bank purchased a controlling interest in Hang Seng Bank, which had been established in Hong Kong in 1933. By the 1970s the policy of expansion by acquisition of subsidiaries with their own identities and specialisations was firmly in place. During the 1980s the Bank concentrated on moving into those markets where it was not yet fully represented. Hongkong Bank of Canada (now HSBC Bank Canada) was established in 1981 and HongkongBank of Australia (now HSBC Bank Australia Limited) in 1986. In 1987 Marine Midland Bank (now HSBC Bank USA), based in New York State, became a wholly owned member of the Group and its principal subsidiary in the United States. HSBC Holdings plc, the parent company of the HSBC Group, was established in 1991 with its shares quoted on both the London and Hong Kong stock exchanges. The acquisition in July 1992 of Midland Bank in the United Kingdom created one of the largest banking and financial services organisations in the world. Midland was founded in 1836 in Birmingham and had grown in the nineteenth and twentieth centuries through a series of mergers and amalgamations. In 1974 Midland acquired the London merchant bank of Samuel Montagu, whose own distinguished history stretches back to 1853. Samuel Montagu has been integrated into HSBC Investment Bank, as has James Capel, a leading London-based international securities company, which was acquired by the Group in 1986. The 1990s have seen further expansion and consolidation of the various businesses of the HSBC Group. In the United States, a joint venture, the Wells Fargo HSBC Trade Bank was formed in 1995. Elsewhere in the Americas in 1997, a new subsidiary Banco HSBC Bamerindus was established in Brazil; the acquisition of the Roberts Group (now called HSBC Bank Argentina SA) in Argentina was completed, and a 19.9 per cent interest in Mexico's Grupo Financiero Serfin was purchased. In 1999, HSBC Holdings plc signed a memorandum of understanding with the Government of Korea for the acquisition of a controlling interest in Seoul Bank, one of the largest commercial banks in South Korea. The HSBC Group now comprises a unique range of banks and financial service providers around the globe.