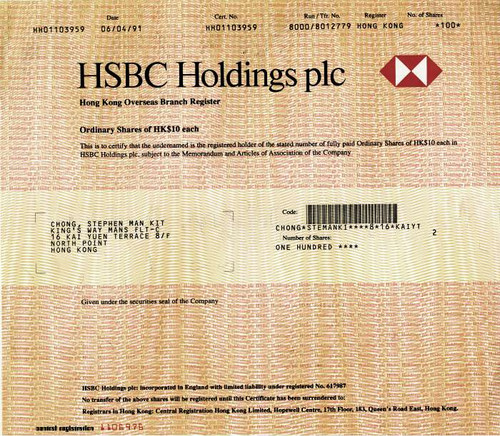 Beautiful certificate from the HSBC Holdings plc. This historic document vignette of the company's name and logo. There is a Chinese watermark in the paper. 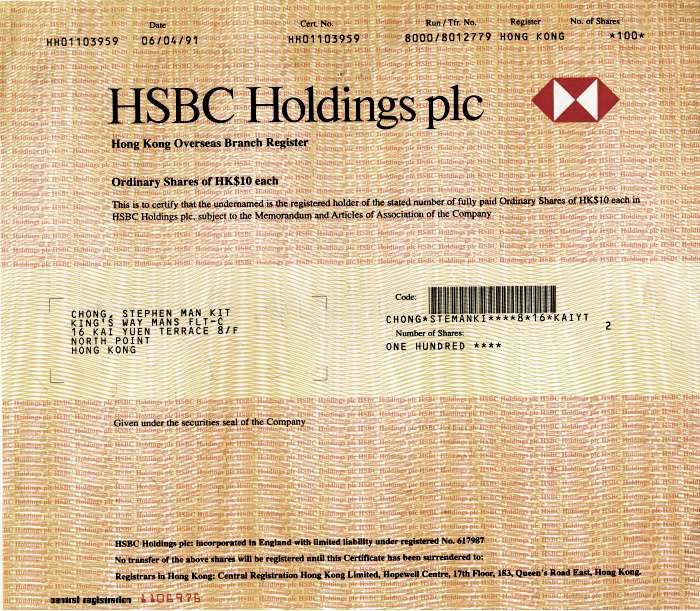 Certificate Vignette
HSBC Holdings plc is a British multinational banking and financial services organisation headquartered in London, United Kingdom. It was founded in London in 1991 by The Hongkong and Shanghai Banking Corporation to act as a new group holding company. The origins of the bank lie in Hong Kong and Shanghai, where branches were first opened in 1865. The HSBC name is derived from the initials of The Hongkong and Shanghai Banking Corporation Limited. It has around 7,200 offices in 85 countries and territories across Africa, Asia, Europe, North America and South America, and around 89 million customers. As of 31 December 2012 it had total assets of $2.693 trillion, of which roughly half were in Europe, the Middle East and Africa, and a quarter each in Asia-Pacific and the Americas. As of 2012, it was the world's largest bank in terms of assets and sixth-largest public company, according to a composite measure by Forbes magazine. HSBC is organised within four business groups: Commercial Banking; Global Banking and Markets (investment banking); Retail Banking and Wealth Management; and Global Private Banking. HSBC has a primary listing on the London Stock Exchange and is a constituent of the FTSE 100 Index. As of 6 July 2012 it had a market capitalisation of £102.7 billion, the second-largest company listed on the London Stock Exchange, after Royal Dutch Shell. It has secondary listings on the Hong Kong Stock Exchange (where it is a constituent of the Hang Seng Index), the New York Stock Exchange, Euronext Paris and the Bermuda Stock Exchange. History from Encyberpedia and OldCompany.com (old stock certificate research service)