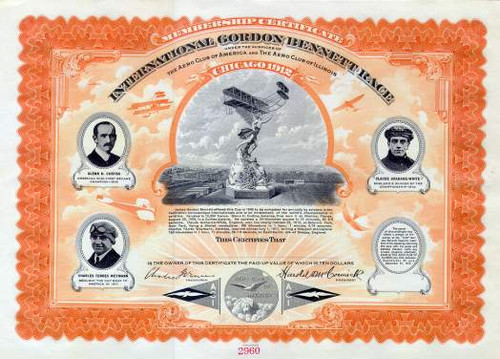 Beautifully engraved unissued Certificate from the International Gordon Bennett Race dated in 1912. This historic document was printed by the Western Banknote & Eng. Company and Western Division - American Banknote Company. This wonderful certificate has an ornate border around it with a vignettes Printed in brilliant orange with portraits of the previous winners: Glenn H., Curtiss [1909] Claude Grahame-White [1910], Charles Terres Weymann [1911] and an empty spot for the winner of the 1912 race. It also has a spectacular center vignette of a statue entitled Coupe Gordon Bennett with a early bi Plane flying overhead.

This item has the printed signatures of the Aero Club of America's President, Harold McCormick and its Treasurer. This early aviation item is over 89 years old. The Gordon Bennett Aviation Trophy was an international airplane racing trophy awarded by James Gordon Bennett, Jr., the American owner and publisher of the New York Herald newspaper. The trophy is one of three Gordon Bennett awards: Bennett was also the sponsor of an automobile race and a ballooning competition. The terms of the trophy competition were the same as those of the Schneider Trophy: each race was hosted by the nation which had won the preceding race, and the trophy would be won outright by the nation whose team won the race three times in succession. Accordingly, after Joseph Sadi-Lecointe's victory in 1920 the Trophy became the permanent possession of the AÃ©ro-Club de France. James Gordon Bennett was born on 10 May 1841. He was the proprietor of the New York Herald from 1868 and co-founder of the Associated Press News Agency. The use of his name as an expletive relates to his outrageous lifestyle. In 1876 he became engaged to a beautiful socialite, Caroline May. On new year's day, 1877, at a party at her father's house, he drunkenly mistook the fireplace for a toilet. After a duel with the young lady's brother, neither being injured, Bennett fled to Paris, smashing up the best known restaurants such as Maxime's; he always paid unstintingly for all damage. About 1877 he built a yacht, the Lysistrata, at a low cost of about $2m in today's money. On board was a Turkish bath, a masseur (on call 24 hours a day) and a padded room holding an Alderney cow to provide Bennett with fresh milk for butter and brandy milk punch. He once tipped a train porter £314,000. He also burnt several thousand francs because the wad of notes in his back pocket was uncomfortable. In 1909 the first air race, called "The Gordon Bennett" was held in Rheims, France, and won by Glenn Curtiss. He also sponsored an annual auto race, baloon races and even co-funded Stanley's expedition to Africa to find Livingston. In 1906 he inaugurated the world's first series of air races by organizing the first balloon race on record and inaugurating it as an international event. Bennett spent a total of $40m in his lifetime. He married Baroness de Reuter in 1914 and died on 14 May 1918. History from Wikipedia and OldCompany.com (old stock certificate research service)