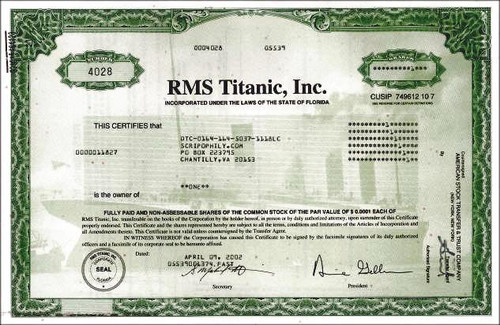 Beautifully engraved certificate from the RMS Titanic, Inc. issued in 2002. This historic document was printed by the Banknote Corporation of America and has an ornate border around it with an underprint of the RMS Titanic. This item has the printed signatures of the Company's President and Secretary. RMS Titanic was a passenger liner that struck an iceberg on her maiden voyage from Southampton, England, to New York City, and sank on 15 April 1912, resulting in the deaths of 1,517 people in one of the deadliest peacetime maritime disasters in history. The largest passenger steamship in the world, the Olympic-class RMS Titanic was owned by the White Star Line and constructed at the Harland and Wolff shipyard in Belfast, Ireland. After setting sail for New York City on 10 April 1912 with 2,223 people on board, she hit the iceberg four days into the crossing, at 11:40 pm on 14 April 1912, and sank at 2:20 am the following morning. The high casualty rate resulting from the sinking was due in part to the fact that, although complying with the regulations of the time, the ship carried lifeboats for only 1,178 people. A disproportionate number of men died due to the "women and children first" protocol that was enforced by the ship's crew. Titanic was designed by experienced engineers, using some of the most advanced technologies and extensive safety features of the time. Adding to the ironic nature of the tragedy is the fact that the liner sank on her maiden voyage. The high loss of life, the media frenzy over Titanic's famous victims, the legends about the sinking, the resulting changes in maritime law, and the discovery of the wreck have all contributed to the enduring interest in Titanic. RMS Titanic, Inc. is the only company permitted by law to recover objects from the wreck of the Titanic. The Company was granted salvor-in-possession rights to the wreck of the Titanic by a United States Federal Court and is the sole exclusive owner of the valuable items recovered from the wreck site. The Company has conducted six research and recovery expeditions to the Titanic wreck site and recovered approximately 6000 artifacts, which represent less than 5% of the artifacts available for recovery. The Company continues to maintain its salvor-in-possession status by making periodic expeditions to the wreck site law and therefore shall be the sole and exclusive owner of items recovered from the Titanic in the future. RMS Titanic, Inc. is also engaged in the business of exhibiting the artifacts recovered from the Titanic wreck site. Titanic Company Postpones Shareholders' Meeting over Salvage Rights Feb. 1, 2003 --NORFOLK, Va. -- R.M.S. Titanic Inc. said it cannot meet with shareholders as scheduled on Wednesday because the Securities and Exchange Commission is still studying the company's latest proxy statement, according to filings with Norfolk's federal court and the SEC. Last year, the SEC notified R.M.S. Titanic's biggest stockholder, and perhaps other company leaders, that it is preparing civil charges against the company or its leaders. In its latest quarterly report, filed Jan. 22, the Atlanta-based company said it lost nearly $1.5 million during the past nine months and is consulting bankruptcy lawyers. The company began salvaging the Titanic in 1987, soon after the shipwreck's discovery. The company was awarded sole salvage rights by Norfolk's federal court in 1994. Norfolk judges have supervised the salvage work ever since. But since a hostile takeover in 1999, the company has faced economic and legal turmoil. It spent more than $550,000 on lawyers during the past year and expects greater legal expenses during the next six months, the report says. R.M.S. Titanic faces several expensive legal actions. First, a dissident stockholder is suing the company and its leaders, alleging fraud and self-dealing. That class-action lawsuit on behalf of all stockholders is pending in Norfolk's federal court. Second, a lawsuit is pending in Florida between the company and its former vice president, G. Michael Harris, who led the last salvage expedition in 2000 and was fired during the voyage. The trial is scheduled for April. Third, dissident stockholders are likely to sue the company to prevent it from relinquishing its salvage rights. That challenge probably would be filed in Norfolk. Finally, the company faces possible civil charges from the SEC, which has been investigating for two years. The investigation stems from the 1999 takeover by a group of entertainment industry executives. At the time of the takeover, company stock sold for about $3.50 a share. It recently closed Friday at 10 cents a share. Meanwhile, the fate of 6,000 artifacts recovered from the ocean floor around the Titanic remains uncertain. A Richmond appeals court ruled last year that R.M.S. Titanic does not own the artifacts but is merely their caretaker. The company now must apply for a salvage award -- compensation for salvage work -- from the Norfolk court. The amount of that award, where the money would come from and who would ultimately own the artifacts remain unknown Modern Certificate Pricing Please note that if you buy a modern certificate from a discount or full service broker, it can cost you between $55 to $100 and that doesn't even include the cost of the stock. You will be charged for a commission and certificate issuance fee. Furthermore, if the company has been delisted and no longer traded, you will unable to get the certificate. Also, the modern certificates we offer have not been folded in thirds which is usually done if you order them directly from a broker. Lastly, the certificates are not issued in your name so if you frame the certificate and/or subsequently resell it as a collectible, the certificate won't have your personal information printed on its face. We do not require you to buy a frame from us for your certificate as it is optional.