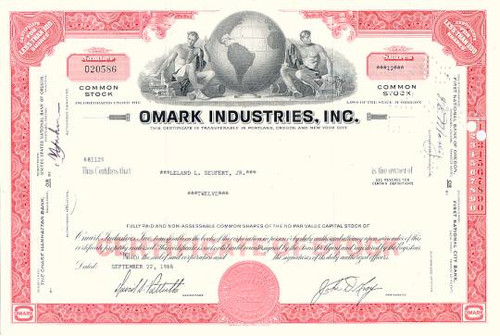 Beautifully engraved Certificate from the Omark Industries issued in 1965 - 1967. This historic document was printed by the American Banknote Company and has an ornate border around it with a vignette of two allegorical men . This item has the printed signature of the company president and is over 32 years old. In 1983, Red Blount of Blount International went to Japan to learn how successful manufacturing companies operated. On that trip Blount asked a Japanese expert which American company had most successfully adopted Japanese manufacturing techniques. The answer was Omark Industries of Portland, Oregon. In January 1985 Blount acquired Omark, the world's leading manufacturer of saw chain and timber harvesting equipment. On August 19, 1999, Blount International, Inc. Blount (NYSE, BLT) and Lehman Brothers Merchant Banking Partners II L.P. and its affiliated co-investors the Lehman Brothers Merchant Banking Fund jointly announce the closing of the merger of Blount with an entity wholly owned by the Lehman Brothers Merchant Banking Fund.