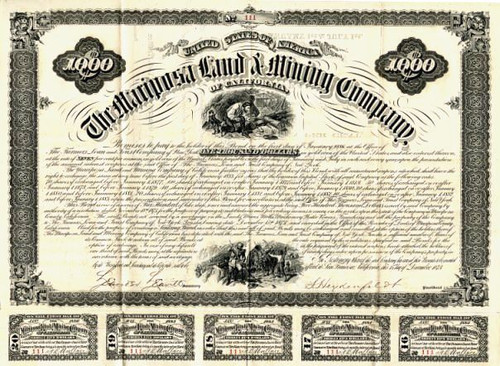 Beautifully printed SCARCE Bond certificate from the Mariposa Land and Mining Company issued in 1875. This historic document was printed by the Continental Banknote Company and has an ornate border around it with vignettes of a miner finding gold with his dog, and pioneers moving west being attached by indians. This item has the signatures of the Company's President, Solomon Heydenfeldt and Secretary, L. Leavitt and is over 146 years old. 19 coupons attached on bottom. 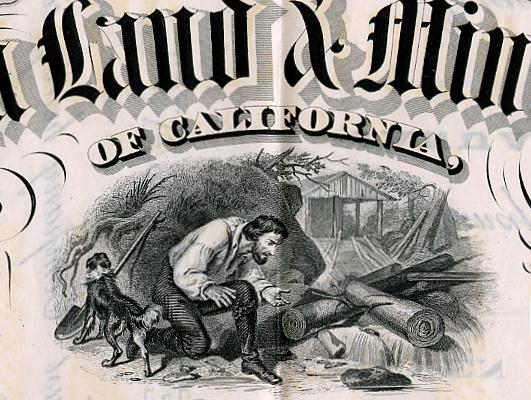 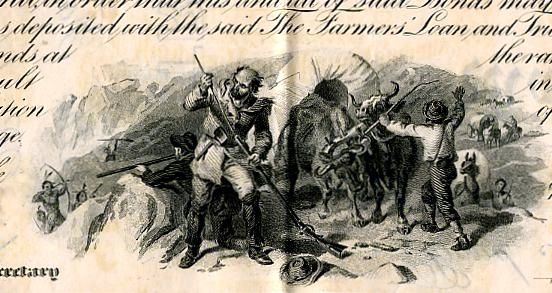 The Mariposa Land & Mining Co was organized in 1871 and incorporated in the state of New York. This is one of the several companies that were formed to operate John C. Fremont's Mariposa Estate. The Josephine, Pine Tree, Princeton and numerous other mines comprised the estate. The company was reorganized in the 1880's under the name Mariposa Mining & Commercial Company. Solomon Heydenfeldt (c.1812-1890) -- of California. Justice of California state supreme court, 1852-57. Died in San Francisco, Calif., September 15, 1890. Solomon Heydenfeldt was an American jurist; born in Charleston, S. C., 1816; died at San Francisco Sept. 15, 1890. When twenty-one years old he left South Carolina for Alabama, where he was admitted to the bar and practised law for a number of years in Tallapoosa county. He was judge of the county court and an unsuccessful candidate for judge of Mobile. Holding views on slavery that were at variance with public opinion, he found himself obliged to leave Alabama for California, and in 1850 he settled in San Francisco. From 1852 to 1857 he was associate judge of the Supreme Court of California, and he was acknowledged to be one of the ablest justices on the bench. He was elected by direct vote of the people, being the first Jew to be thus honored. Heydenfeldt was a Democratic politician of Southern proclivities, and supported Breckinridge in his campaign against Lincoln. Early in life he was an unsuccessful candidate for the office of United States senator before the California legislature, and he was a member of several conventions. His practice brought him a case wherein he vindicated the right of the Jews to labor on Sunday ("People vs. Newman," 9 Cal. 502). Finally, when a test oath was required from lawyers, he refused to take it and retired from public practice. History from Wikipedia and OldCompany.com (old stock certificate research service)