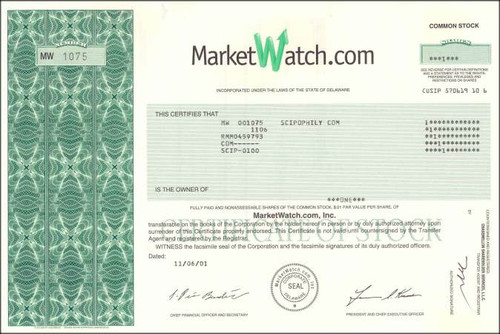 Beautifully engraved certificate from MarketWatch.com . This historic document was printed by the United States Banknote Company and has an ornateblock border around it with a vignette of the company's logo. This item has the printed signatures of the Company's President (Larry Kramer) and Chief Financial Officer.

Certificate Vignette
MarketWatch.com is the number one financial news and information source on the Internet. Founded in 1997, MarketWatch.com operates three web sites: CBS.MarketWatch.com, BigCharts.com, and U.K.- based FTMarketWatch.com. In addition to offering top-notch financial reporting and investment tools on its web sites, MarketWatch.com licenses a wide array of content and tools in custom-designed formats for brokerages and other online businesses. The Company also produces the syndicated CBS MarketWatch Weekend program, airs financial reports over CBS Network Television, and provides updates every 30 minutes on the MarketWatch.com Radio Network. Editorial content from CBS.MarketWatch.com is distributed in major newspapers and wireless networks. As a leading financial media company, more than 800 stories, briefs and headlines are created each market day by 100 MarketWatch.com journalists in 12 bureaus around the world, providing "the story behind the numbers" online and offline. The company's two largest investors are CBS and Pearson plc, the parent company of The Financial Times Group. They each own approximately 34% of the Company's common stock, with the remainder being publicly traded (NASDAQ:MKTW). The editorial and business accomplishments of MarketWatch.com have been cited by many top-tier publications including Forbes, Barron's, U.S. News & World Report, Esquire, Fortune, Consumer Reports, Money, The Washington Post, The San Francisco Chronicle, and The Boston Herald. Headquartered in San Francisco, CA, MarketWatch.com has facilities and bureaus around the world, including New York, Los Angeles, Atlanta, Minneapolis, Washington, Chicago, Boston, Dallas, London, Tokyo and Hong Kong.

Paypal - Peter A. Thiel as CEO