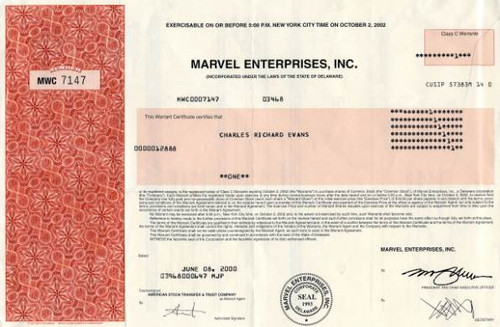 Beautifully engraved certificate from Marvel Enterprises, Inc. issued in 2000. This historic document was printed by the Security-Columbian Banknote Company. This item has the printed signatures of the Company's President and Secretary. With a library of over 5,000 proprietary characters, Marvel Enterprises, Inc. is one of the world's most prominent character-based entertainment companies. Marvel's operations are focused in four areas: entertainment (Marvel Studios), licensing, publishing and toys (Toy Biz). Marvel facilitates the creation of entertainment projects, including feature films, DVD/home video, video games and television based on its characters and also licenses its characters for use in a wide range of consumer products and services including apparel, toys, collectibles, snack foods and promotions. Marvel's characters and plot lines are created by its publishing division which continues to expand its leadership position in the U.S. and worldwide while also serving as an invaluable source of intellectual property.