Maxfield Parrish hand signed cancelled check for issued for $50 Cash from the State National Bank of Windsor, Vermont dated in 1932. This historic document was printed by Bankers Supply Company and is over 76 years old. Small water spot touches last name. Condition of check is XF+ with no folds. 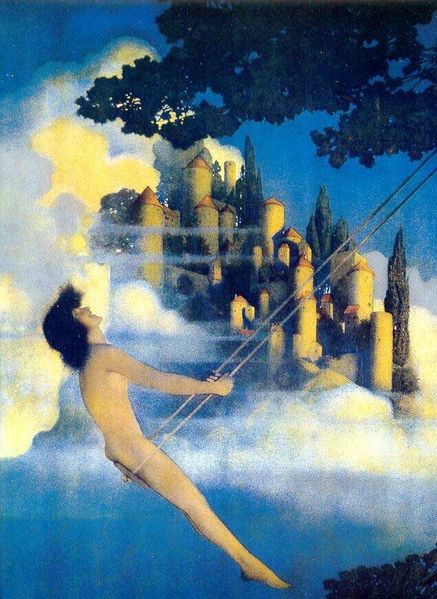 The Dinky Bird by Maxfield Parrish, 1904 shown for Illustrative Purposes
Maxfield Parrish (July 25, 1870 - March 30, 1966) was an American painter and illustrator. Born in Philadelphia, Pennsylvania, he began drawing for his own amusement as a child. His given name was Frederick Parrish but he later adopted the maiden name of his paternal grandmother, Maxfield, as his middle name, and later as his professional name. His father was an engraver and landscape artist, and young Parrish's parents encouraged his talent. He attended Haverford College and the Pennsylvania Academy of the Fine Arts. He entered into an artistic career that lasted for more than half a century, and which helped shape the Golden Age of illustration and the future of American visual arts. The Dream Garden, a mosaic by Louis Comfort Tiffany based on a Parrish painting. It may be seen at the Curtis Building in Philadelphia.Launched by a commission to illustrate L. Frank Baum's Mother Goose in Prose in 1897, his repertoire included many prestigious projects including Eugene Field's Poems of Childhood (including 8 colour plates) (1904) (see illustration) and such traditional works as Arabian Nights (including 12 colour plates) (1909). Books illustrated by Parrish, in addition to those that include reproductions of Parrish's work - including A Wonder Book and Tanglewood Tales (including 10 colour plates) (1910), The Golden Treasury of Songs and Lyrics (including 8 colour plates) (1911) and The Knave of Hearts (including 23 colour images) (1925) - are highly sought-after collectors items. He had numerous commissions from popular magazines in the 1910s and 1920s including Hearst's, Colliers, and Life. He was also a favorite of advertisers, including Wanamaker's, Edison-Mazda Lamps, Fisk Tires, Colgate and Oneida Cutlery. In the 1920s, Parrish turned away from illustration and concentrated on painting for its own sake. Androgynous nudes in fantastical settings were a recurring theme. He continued in this vein for several years, living comfortably off the royalties brought in by the production of posters and calendars featuring his works. An early favorite model was Kitty Owen in the 1920's. Later another favorite, Susan Lewin, posed for many works, and was employed in the Parrish household for many years. Parrish himself posed for many images that featured male -- and occasionally female -- figures (see Potpourri, 1905). In 1931, he declared to the Associated Press, "I'm done with girls on rocks", and opted instead to focus on landscapes. Though never as popular as his earlier works, he profited from them. He would often build models of the landscapes he wished to paint, using various lighting setups before deciding on a preferred view, which he would photograph as a basis for the painting (see for example, The Millpond). He lived near Cornish, New Hampshire and painted until he was 91 years old. A fantastical Parrish illustration titled Cadmus Sowing the Dragon's Teeth, which appeared in Collier's in 1908 and A Wonder Book and Tanglewood Tales, by Nathaniel Hawthorne.Parrish's art features dazzlingly luminous colors; the color Parrish blue was named in acknowledgement. He achieved the results by means of a technique called glazing where bright layers of oil color separated by varnish are applied alternately over a base rendering (Parrish usually used a blue and white monochromatic underpainting). He would build-up the depth in his paintings by photographing, enlarging, projecting and tracing half or full size objects or figures. Parrish then cut out and placed the images on his canvas, covering them with thick, but clear, layers of glaze. The result is realism of elegiac vivacity. His work achieves a unique three-dimensional appearance, which does not translate well to coffee table books. Parrish devised many innovative techniques which no other major artist has successfully copied. A technique which Parrish used frequently involved creating a large piece of cloth with a geometric pattern in stark black-and-white (such as alternate black and white squares, or a regular pattern of black circles on a white background). A human model (often Parrish himself) would then pose for a photograph with this cloth draped naturally on his or her body in a manner which intentionally distorted the pattern. Parrish would develop a transparency of the photo, then project this onto the canvas of his current work in progress. Using black graphite on the white canvas, Parrish would painstakingly trace and fill in all the black portions of the projected photo. The result was astonishing: in the finished painting, a human figure would be seen wearing a distinctive geometrically-patterned cloth which draped realistically and accurately. Parrish's work defies categorization since he was part of no traditional movement or school, and developed an original and individual style. However, his work has been highly influential. Among recent homages was the 1995 music video, You Are Not Alone, featuring Michael Jackson and his then wife Lisa Marie Presley, in which they appear semi-nude in emulation of Parrish's most famous work, Daybreak 1922. The Irish musician Enya has also been inspired by the works of Parrish. For example, the cover art of her 1995 album, The Memory of Trees, is based on his painting Black Isles. She has also used his inspiration in a number of her music videos. The Elton John album, Caribou, has a Maxfield Parrish background. The Moody Blues album, The Present, uses a variation of Daybreak for its cover. In 1984, Dali's Car, the British New Wave project of Peter Murphy and Mick Karn, use the Parrish painting, The Waking Hour as the cover art and title of their only album. In 2001, Parrish was featured in a U.S. Post Office commemorative stamp series honoring American illustrators, including Rockwell Kent, Norman Rockwell, Frederic Remington, and 16 others. The Metropolitan Museum of Art, New York, many other museums have samples of his work. The San Diego Museum of Art toured a collection of his work in 2005. The National Museum of American Illustration claims the largest body of his oeuvre in any collection, with sixty-nine works by Parrish (links below). His second son Maxfield Parrish Jr. is know for his important contribution to the development of the first self-developing camera at Dr. Edwin H. Land's Polaroid Corporation. History from Wikipedia and OldCompanyResearch.com (old stock certificate research service).