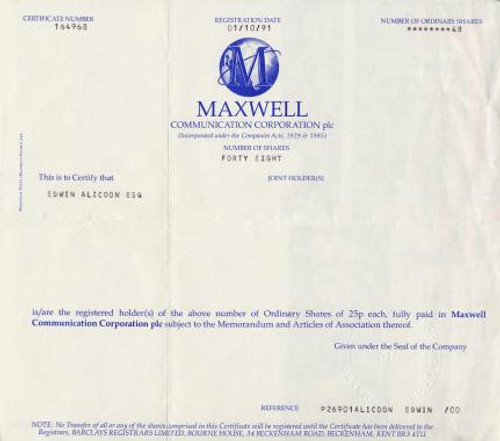 Beautifully engraved certificate from the Maxwell Communication Corporation dated 1989 - 1991. This historic document has a vignette of the company's logo and is over 14 years old. 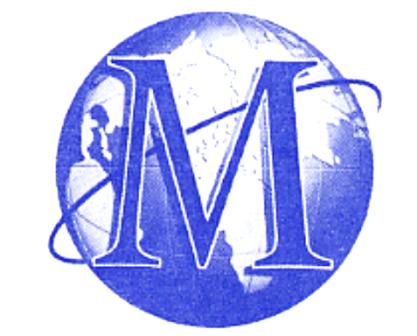 Certificate Vignette
Robert Maxwell was an international legend who became one of Great Britain's most powerful millionaires, building a media empire almost single- handedly. Although Maxwell had little formal education, his energy and leadership abilities helped him to create an empire with two major public companies (Mirror Group Newspapers and Maxwell Communication Corporation) and 400 private firms. He was a member of what the Media Studies Journal described as a powerful breed known as media moguls. Maxwell was born Jan Ludwik Hoch on June 10, 1923, the seventh child of poor Jewish agricultural workers in a Czech village. When Germany invaded Czechoslovakia in 1938, Hoch joined the Czech resistance. He was captured, but he escaped and fled the country. His father was shot by Germans, and his mother died at Auschwitz. He joined the British Army and emerged from the war with a commission (captain) and a British medal for gallantry. During the war he changed his name to Ivan du Maurier (after a favorite brand of cigarettes), to Leslie Jones, and then to Robert Maxwell. He married Elizabeth Meynard, a French interpreter, and learned to speak nine languages fluently. From 1964 to 1970, Maxwell represented the Labour Party in Parliament. When he was found guilty of exaggerating the profits of his company, Pergamon Press, he was cited by the Board of Trade as unfit to run a public company. Undaunted, Maxwell persevered. In the 1970s, he turned the fledging British Printing Corporation into his profitable British Printing and Communication Corporation. In the early 1980s, he bought and strengthened the influential Mirror Group Newspapers. Firmly established as a British media millionaire, the power-hungry Maxwell went global in 1988. He bought the Official Airline Guides from Dun & Bradstreet and engineered the takeover of Macmillan Publishing Company. In 1990, he started a European newspaper, hoping to take advantage of merging European interests and identities. Many of Maxwell's ventures were not successful. His moves into satellite and cable came to dead-ends, his stock in Central Independent Television had to be sold, and his attempt at a twenty-four-hour-a-day London newspaper failed. In November 1991, Maxwell's house of cards tumbled. He died on November 5 in a mysterious fall from his yacht. His companies were found to be bankrupt, and he had misused their pension funds. He had committed fraud against scores of banks and had established a record of borrowing, lending, transferring, converting, and tax evading.