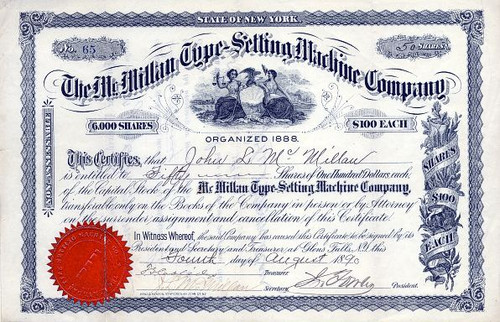 Beautiful certificate from the McMillan Type - Setting Machine Company issued in 1890. This historic document was printed by the Ben J. D. Benson Stationer and has an ornate border around it with a vignette of an two allegorical women with an eagle perched between them. This item has the signatures of the Company's President, Secretary, J. L. Mc Millan and Treasurer. This certificate is over 119 years old. The certificate was issued to John L. McMillan and is endorsed by him on the verso. 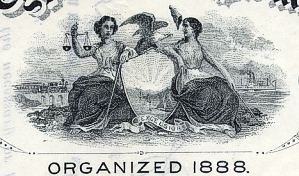 Certificate Vignette
HISTORY OF ILION INDUSTRY VILLAGE OF ILION 1852-1952 McMILLAN TYPESETTING In the 1880's amd 1890's, there was produced in Ilion a typesetting machine, perfected to the point of setting, distributing the type and justifying the printed line. For years attempts had been made but the Remington typewriter was the inspiration for this first successful machine, devised by John L. McMillan of Glens Falls. In 1879, at the age of 20, he saw a Remington typewriter for the first time and learned that it could be operated at high speed; three months later he observed a man setting type and it occurred to him that the work ought to be done mechanically. He knew nothing about typesetting machines, so began to study to see why previous inventions had been failures. Two years later he had a satisfactory model and in 1883 the McMillan Type - Setting Machine Company , with $600,000 capital, was formed. He came to Ilion that year to avail himself of the unrivaled facilities of the Remington Armory. A year later a model was finished and was used in the office of the Ilion Citizen to set part of the type until in September 1884 the whole issue was set by the McMillan machine to the amazement of the newspaper world. This also added a "first" to the list of Ilion's "firsts." Next followed a machine which automatically distributed the type after use. Machines were sold, a few going abroad. "Girls and lady compositors" could operate them as well as men. They were used by the Albany Eventing Journal, Century Magazine, Scribner's Magazine, Louisville, Ky., Syracuse Daily Herald, New York Sun, Utica Herald, etc. In 1891 in Chicago, the American newspaper Publisher's Asociation ran a test of current typsetting machines. The Citizen ran the heading "McMillan Wins" but when the results were announced the judges had put the McMillan at the bottom of the list, the others, all of them linotypes, were placed ahead of it. The Citizen had judged by the fact that the McMillan had set 60% more type than the others and had done a better looking piece of work. According to the Ilion News practical printers favored the McMillan machine. As late as 1900 a machine was sold to the Little Falls Evening Times. However, McMillan continued to manufacture and sell machines, and to add improvements, In 1893 he brought out a mechanical justifier, again a "first" for the Citizen and Ilion. But the linotype. capable of being operated by one person instead of the three used by the McMillan, supplanted it and in 1899 a new company was formed, the McMillan Book Company which manufactured the McMilllan Patent Record Book for use with typewriters. The leaves were detachable and bound as used. This business progressed rapidly in Ilion until 1902 when it was moved to Syracuse. McMillan Type-setting Machine. This machine, invented in 1883, belongs to the class utilizing gravity as the force for gathering the type to a common center. There are three parts, each independent of the other: The type-setting machine, the distributer and the justifier. The machine proper occupies about half the space of the compositor's " frame." The operator sits before a keyboard, and works the keys as in the ordinary Remington typewriter. Set above the keyboard are four " sections," each containing twenty MC MILLAN DISTRIBUTING-MACHINE. brass channels, each about twenty-four inches in length. These contain the various types. Each "channel " swings on a hinge as a door swings. By the touching of a key the required type is released, and drops by gravity into a race, whence it is carried forward to its destination, a peculiarly constructed "storage-galley," where line after line of "set" matter is "stored" for manipulation. The " storage-galley " is rectangular in shape; is about twenty-four inches in length; will hold from twenty to forty lines, according to the size of the type, and reserves in temporary store five thousand or six thousand ems of matter. From this "storage- galley " a proof is taken, and when corrected the final justification is made. The distributer is distinct from the type-setter. It consists of a disk revolving within a series of " sections " radiating from its outer circumference. The type is fed line after line into the disk-channels, while the steady revolution of the disk carries it around, and when the appropriate place for the type is found, as is indicated by the nicks, it is " discharged " into the "channels" severally designated by mechanical appliances. When a "channel" is filled, it is removed and stored on a "channel-rack," an "empty " channel being put in its place. The proof having been taken from the " storage-galley," nothing remains but the final justification into line- measure, which is done on a machine with one operator, when the matter is ready for the form. See also Linotype, in these Supplements; and TypogRaphy, Vol. XXIII, pp. 745, 746.