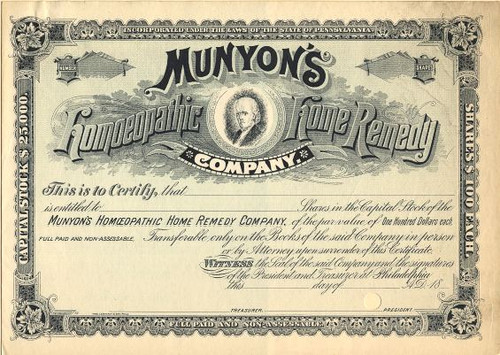 Beautiful specimen certificate from the Munyon's Homoeopathic Home Remedy Company dated in the 1880's. This historic document was printed by Theo. Leonhardt & Son and has an ornate border around it with a vignette of the company's founder, Dr. Munyon. This item is over 120 years old. 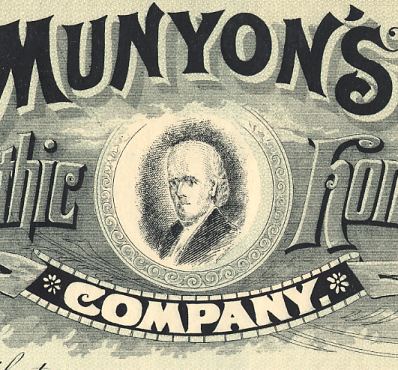 Certificate Vignette
Homeopathic medicine is an idea that developed around 200 years ago. One of the famous 19th-century homeopathic companies was Dr. Munyon's. His medicine was sold in drugstores from a decorated metal cabinet picturing the stern doctor. The quote beneath his picture reads, "I would rather preserve the health of the nation than be its ruler." It was easy for a shopper to choose the right medicine. The back of the cabinet had small drawers, each labeled with a health problem. Cold remedies were kept in Drawer 5; general debility was cured from Drawer 7. The medicine was in tubes or in small cardboard packages that held glass bottles filled with liquid or pills. Munyon's medicines were sold internationally. About Specimens Specimen Certificates are actual certificates that have never been issued. They were usually kept by the printers in their permanent archives as their only example of a particular certificate. Sometimes you will see a hand stamp on the certificate that says "Do not remove from file". Specimens were also used to show prospective clients different types of certificate designs that were available. Specimen certificates are usually much scarcer than issued certificates. In fact, many times they are the only way to get a certificate for a particular company because the issued certificates were redeemed and destroyed. In a few instances, Specimen certificates we made for a company but were never used because a different design was chosen by the company. These certificates are normally stamped "Specimen" or they have small holes spelling the word specimen. Most of the time they don't have a serial number, or they have a serial number of 00000. This is an exciting sector of the hobby that grown in popularity over the past several years.