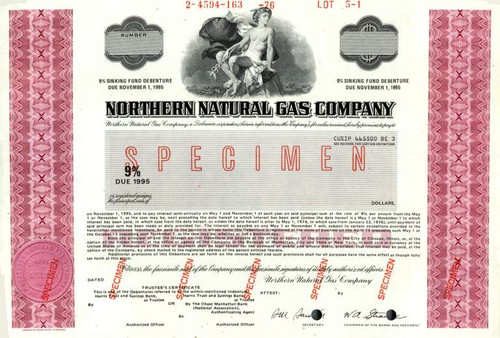 Beautifully engraved specimen bond certificate from the Northern Natural Gas Company printed in 1976. This historic document was printed by the American Banknote Company and has an ornate border around it with a vignette of Mercury. This item has the printed signatures of the Company's officers. 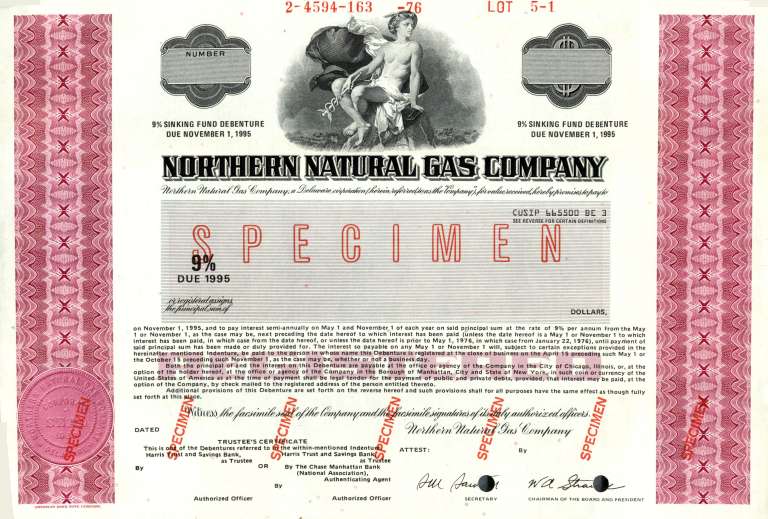 Certificate
Enron's predecessor was the Northern Natural Gas Company, which was formed during 1932, in Omaha, Nebraska. It was reorganized during 1979 as the main subsidiary of a holding company, InterNorth which was a diversified energy and energy related products company. Internorth was a major business for natural gas production, transmission and marketing as well as for natural gas liquids and was an innovator in the plastics industry. It owned the company Peak Antifreeze and developed EVAL resins for food packaging. During 1985, it bought the smaller and less diversified Houston Natural Gas company. The company initially named itself "HNG/InterNorth Inc.", even though InterNorth was the nominal parent. It built a large and lavish headquarters complex with pink marble in Omaha (dubbed locally as the "Pink Palace"), that was later sold to Physicians Mutual corporation. However, the departure of ex-InterNorth and first CEO of Enron Corp Samuel Segnar six months after the merger allowed former HNG CEO Kenneth Lay to become the next CEO of the newly merged company. Lay soon relocated the company's headquarters to Houston (after promising to keep it in Omaha) and began to change the business. Lay and his secretary, Nancy McNeil, originally selected the name "Enteron" (possibly spelled in "camelcase" as "EnterOn"), but, when informed that the term approximated a Greek word referring to the intestines, the name was quickly abbreviated to Enron. The final name was decided upon only after business cards, stationery, and other items had been printed reading "Enteron". Enron's "crooked E" logo was designed during the mid-1990s by the American graphic designer Paul Rand. Rand's original design included one of the elements of the E in yellow which disappeared when copied or faxed. This was quickly replaced by a green element. Almost immediately after the relocation to Houston, Enron began selling major assets such as its chemicals division Northern PetroChemicals, accepted silent partners in Enron CoGeneration, Northern Border Pipeline and Transwestern Pipeline, and became a less diversified company. Early financial analysts said Enron was accumulating great debt and the sale of major operations would not solve the problem History from Wikipedia and OldCompany.com (old stock certificate research service) About Specimen Certificates Specimen Certificates are actual certificates that have never been issued. They were usually kept by the printers in their permanent archives as their only example of a particular certificate. Sometimes you will see a hand stamp on the certificate that says "Do not remove from file". Specimens were also used to show prospective clients different types of certificate designs that were available. Specimen certificates are usually much scarcer than issued certificates. In fact, many times they are the only way to get a certificate for a particular company because the issued certificates were redeemed and destroyed. In a few instances, Specimen certificates were made for a company but were never used because a different design was chosen by the company. These certificates are normally stamped "Specimen" or they have small holes spelling the word specimen. Most of the time they don't have a serial number, or they have a serial number of 00000. This is an exciting sector of the hobby that has grown in popularity over the past several years.