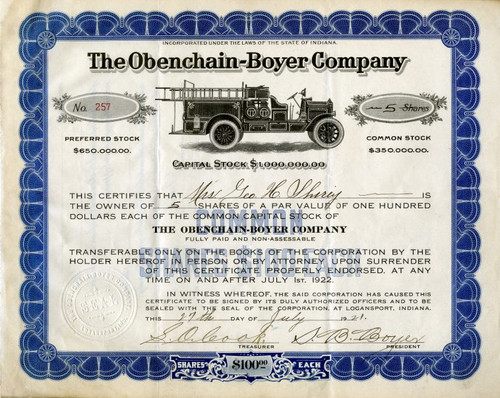 Beautiful stock engraved certificate from the The Obenchain - Boyer Company issued in 1921. This historic document has an ornate border around it with a vignette of the company's fire truck. This item has the signatures of the Company's President, Stephen B. Boyer and Secretary, S. O. Cook and is 99 years old. 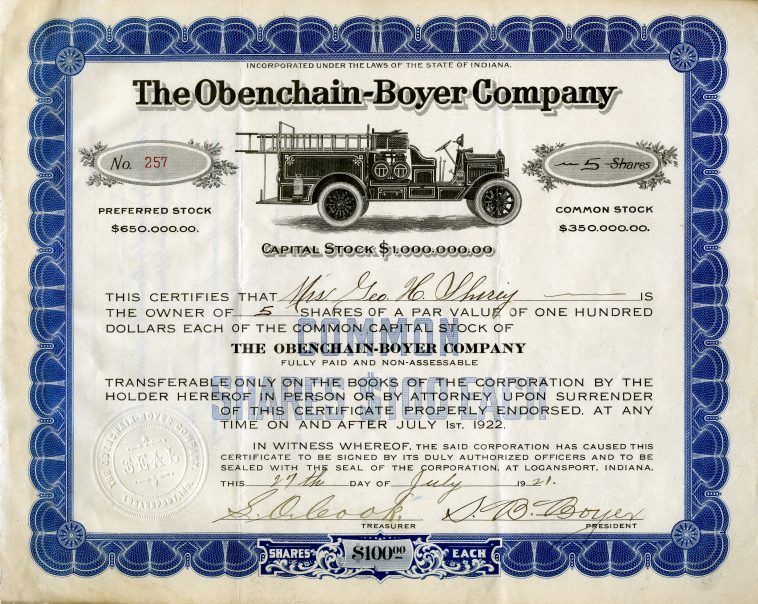 The Obenchain-Boyer Company of Logansport, Indiana, started building soda-acid chemical systems for fire apparatus in the early 1900s. The firm would eventually start building complete fire apparatus using commercial truck chassis. In 1925, the name of the firm was changed to Boyer Fire Apparatus. The firm expanded its offerings to include a wide variety of pumpers and quadruple combination apparatus. After World War II, Boyer continued to offer a variety of apparatus on commercial truck chassis. After an early 1950s corporate restructuring, Boyer fire apparatus was built and sold by Universal Fire Apparatus. The following was a press release in 1925: Obenchain-Boyer Changed To Boyer Fire Apparatus Co. The Obenchain-Boyer Company, Logansport, Ind., one of the pioneers in the manufacture of fire apparatus in this country, has changed its name to the Boyer Fire Apparatus Company. This has been done in order to more closely identify the name of the company with the products it manufactures. There is no change in the organization of the company, Stephen B. Boyer, one of the founders, remaining the president and general manager. History from Wikipedia and OldCompany.com (old stock certificate research service)