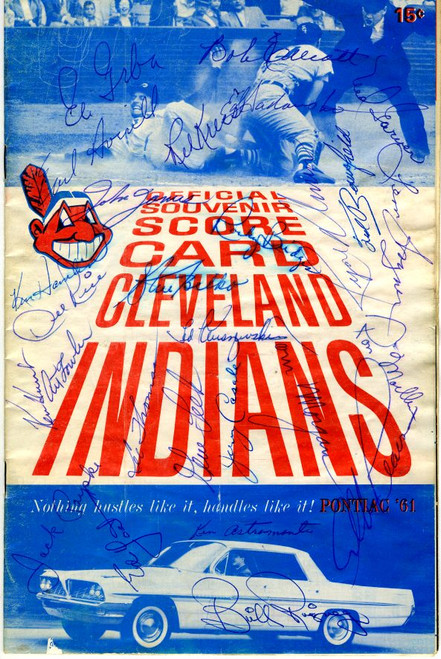 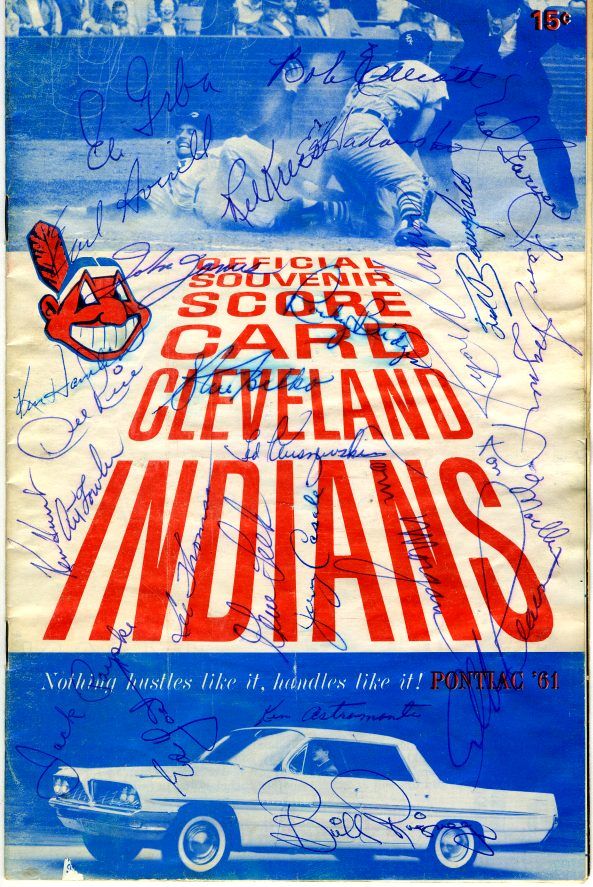 Angel's signed scorecard
25 signatures on face including Rigney, Kluszewski, Kress, Rice, Bilko, Thomas, Aspromonte, Bridges, Moeller, Hunt, and others. An expansion franchise, the club was founded in Los Angeles in 1961. Then the Los Angeles Angels, the team was based in Los Angeles's Wrigley Field (not to be confused with Chicago's legendary sports venue of the same name). The team went through several name changes in their history, first changing to the California Angels in 1965, to emphasize their status as the only AL team in California. In 1997, after the Disney Company took control, they renovated Angel Stadium. The two main criteria were that the stadium's name and the team's name have "Anaheim" (the neighbor of LA where the team had been based for decades) in it, as Disney was hoping to make the home of their Disneyland Park a major tourist destination. The team became the Anaheim Angels. In 2005, the team wanted to change its name back to the original, so as not to alienate the Los Angeles market. However, their agreement, demanded that they have "Anaheim" in the name, so they became the Los Angeles Angels of Anaheim. This name change was hotly disputed by the city of Anaheim and the Los Angeles Dodgers, who wanted LA to themselves, but the change stood, and still stands today. The American League comes to Los Angeles For many years, there had been talk of an existing American League team relocating to Los Angeles. In 1940, the St. Louis Browns asked AL owners for permission to move to Los Angeles, but were turned down. They planned another move for the 1942 season, and this time got permission from the league. A schedule was even drawn up including Los Angeles, but the bombing of Pearl Harbor in December 1941 made major-league sports of any sort on the West Coast unviable. In 1953, there was again talk of the Browns moving to L.A. for the 1954 season, but the team was sold and moved to Baltimore instead as the Orioles. There were on-again, off-again discussions between city officials and the Washington Senators regarding a possible move. There were also rumors that the Philadelphia Athletics' move to Kansas City in 1955 was a temporary stop on the way to Los Angeles. In the end it was the National League that first came to the city, in the form of the Brooklyn Dodgers. Dodgers owner Walter O'Malley purchased the Pacific Coast League's Los Angeles Angels in early 1957 from Chicago Cubs owner Phil Wrigley. Under the rules of the time, he also acquired the rights to a major league team in Los Angeles, which he used to move the Dodgers there a year later. Under ordinary circumstances, that would have precluded any subsequent American League presence in the Los Angeles area. However, in an effort to prevent the proposed Continental League from becoming a reality, in 1960 the two existing leagues agreed to expand, adding two new teams to each league. Though the understanding was that expansion teams would be placed in cities without major league baseball, that agreement quickly broke down. When the National League placed a team in New York (the Mets) as its tenth franchise, the American League announced plans to place an expansion team in Los Angeles, to begin play in 1961. Gene Autry, former movie cowboy, singer, actor and owner of Golden West Broadcasting (including Los Angeles' KMPC radio and KTLA television), attended the Major League Owners' meeting in St. Louis in 1960 in hopes of winning broadcasting rights for the new team's games. Hall of Famer Hank Greenberg was initially on the fast track to be the team's first owner, with Bill Veeck as a partner. However, O'Malley wasn't about to compete with Veeck and threatened to scuttle the whole deal by invoking his exclusive right to operate a major league team in Southern California. After it became obvious that O'Malley would never sign off on the deal as long as Veeck was a part-owner, Greenberg was forced to bow out. After another bid by Chicago insurance executive and future A's owner Charlie Finley failed, Autry was persuaded to make a bid himself. Autry (who had been a minority stockholder in the Angels' PCL rival, the Hollywood Stars) agreed, and purchased the franchise. Autry named the new franchise the Los Angeles Angels. The origins of the name date back to 1892, when it was first used by a Los Angeles franchise in the California League. The Angel moniker has always been natural for Los Angeles teams, since The Angels is a literal English translation of the Spanish Los Angeles. It was also a nod to the long-successful PCL team that played in Los Angeles from 1903 through 1957. O'Malley still owned the rights to the Angels name even after moving the team to Spokane to make way for the Dodgers, so Autry paid O'Malley $300,000 for the rights to the name. History from wikipedia and RM Smythe Research Department.