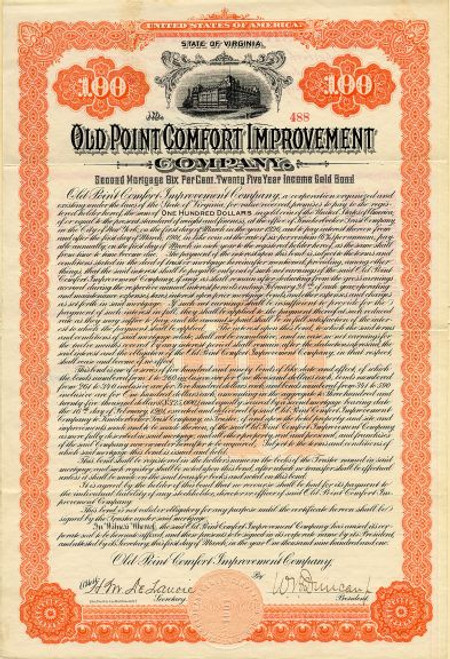 Beautiful certificate from the Old Point Comfort Improvement Company issued in 1901. This historic document was printed by Franklin-Lee Litho Company and has an ornate border around it with a vignette of the Hotel Chamberlin. This item has the signatures of the Company's President, W. B. Duncan, Jr. and Secretary, H.M. De Lauoie and is over 107 years old. 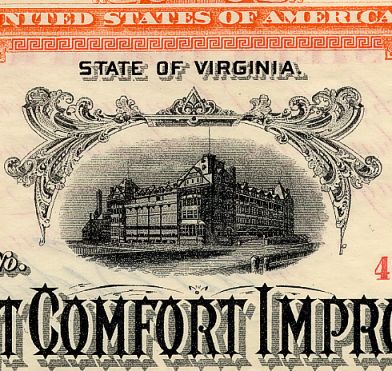 Certificate Vignette
The Old Point Comfort Improvement Company owned and operated the Hotel Chamberlin and Hotel Hygeia. Old Point Comfort is a point of land located in the independent city of Hampton at the extreme tip of the Virginia Peninsula at the mouth of Hampton Roads in the United States. For most of the 19th and 20th centuries, Old Point Comfort was a summer and winter resort in the town of Phoebus in Elizabeth City County until the citizens of both the town and county voted to be consolidated with the independent city of Hampton in 1952. The Chamberlin Hotel was known in its early days as a place of opulence for military dignitaries on Fort Monroe. The Chamberlin was one of a series of hotels to grace Old Point Comfort on the peninsula containing Fort Monroe and marking the entrance to Hampton Roads harbor. One was the antebellum Hygeia Hotel, which was razed only six years after the opening of the more modern Chamberlin. The first Hotel Chamberlin was the brainchild of restaurateur and gaming magnate, John Chamberlin. He chose Smithmeyer and Pelz, architects of the Library of Congress, to design the hotel. This massive Queen Anne establishment was to feature the latest in amenities, including an on-site ice plant, laundry, billiard rooms, a bowling alley, an electrical plant, as well as shops and railroad and telegraph offices. The public spaces were impressive. The dining room was given a large gallery to house the dinner orchestra, and large windows affording a view of Hampton Roads. The ballroom was 1,000 square feet in size.