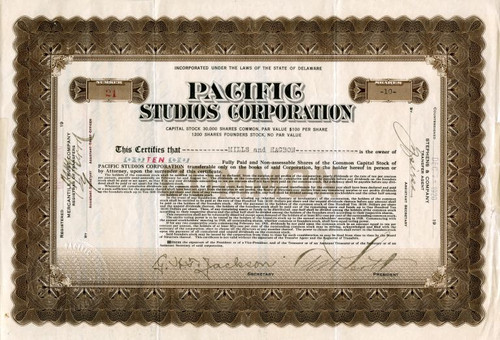 Beautiful RARE stock certificate from the Pacific Studios Corporation issued in 1920. This historic document has an ornate border around it with a vignette of the company's name. This item has the signatures of the Company's President, A. W. Scott, Jr and Secretary, G. Jackson. 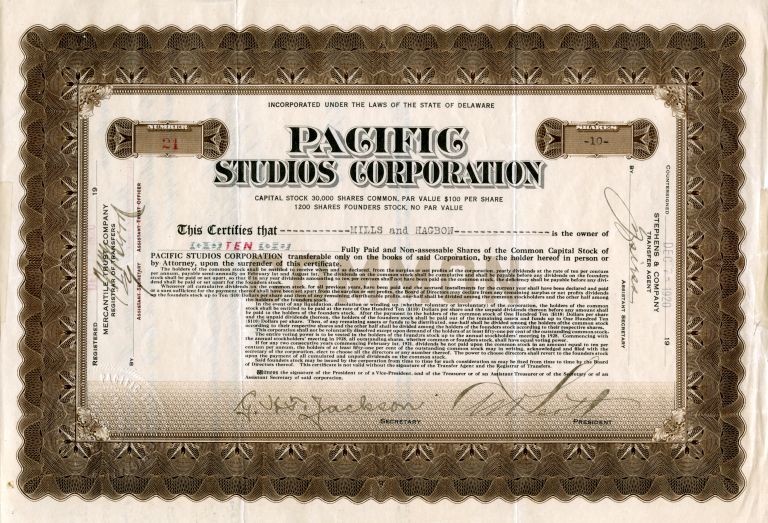 Certificate
History from Daily Journal - San Mateo County's homepage Pacific Studios: Movie Making San Mateo-style November 20, 2000, 12:00 AM By Paul D. Buchanan Once upon a time a small, intrepid group of local investors dreamed of bringing the glamour of Hollywood to the Peninsula. Through a mercurial enterprise called Pacific Studios Corporation, the magic of movie making touched the city of San Mateo at a time when the film industry remained in its formative stages. The 1920's had become the heyday of silent films, the infant years of movie making, before Hollywood established itself as the movie capital. Across the bay in Niles, artists such as Charlie Chaplin and Bronco Billy Anderson created films through Essanay Studios, to a delighted a growing fan base. Entrepreneurs in San Mateo hoped to create a rival to Essanay called Pacific Studios. The original investors included former Golden Gate Studios partner A. W. Scott, Jr. who would serve as Pacific Studio's first president. Additional funders included John Gallois of Ralph Weill & Company, plus J.F. McGee and R. Stephens of San Francisco's Stephens and Company Brokers. These businessmen gained support of Chamber of Commerce President J.J. McGrath, plus Mayor Rolph of San Francisco, Mayor Brady of San Mateo, and Mayor Pearson of Burlingame. The investors purchased a 103-acre parcel east of the railroad tracks, on Peninsula Avenue in north San Mateo. They touted the wonderful production conditions along the Peninsula, saying the surrounding open and divergent land would be ideal for film making. Studio construction began in 1920, with the dream of accommodating as many as twenty-four production companies. At a cost of half a million dollars, architect Harold Stoner, and construction engineers Roy Purnel and John Jasper apparently tried to reproduce the Southern California ambiance in San Mateo. They infused a Mediterranean feel to the edifice, constructing two, one-story stucco Spanish Colonial Revival, complete with tile roof and palm trees. The building at what is now 430 Peninsula held the administrative offices, while 444 Peninsula furnished the dressing and costume areas. The complex would eventually include a projecting room, a cutting room, a laboratory and two stages. At one point a drive-in theater occupied what is now Studio Circle, situated behind the dressing rooms. On November 14, 1920, ten thousand people reportedly turned out for Pacific Studios' grand opening. Of the half a dozen or so films shot at Pacific Studios, the most famous may have been White Hands, released in 1922. The story seemed to involve a evil sea captain, a missionary girl, the white hands of a child, and buried treasure. The film starred veteran stage and screen actor Hobart Bosworth as the malevolent Captain Hardy. At age 57 when he made the picture, Bosworth had already starred with the likes of Greta Garbo and John Gilbert. His co-star was Elinor Fair, a glamorous silent film starlet who had once been married to William Boyd, of Hopalong Cassidy fame. Production of White Hands began in August of 1921. The company reportedly used Coyote Point as the location of Algiers, and the sand dunes of Ocean Beach became the Sahara Desert. White Hands premiered at the Garden Theater on Burlingame Avenue in Burlingame, drawing a substantial throng. To the chagrin of San Mateans, the film ended with the credit line "Made in San Francisco". Another film produced at Pacific Studios was titled The Great Alone. Filmed in 1922, The Great Alone told an adventure story set in Alaskan wilderness,. It starred one-time matinee heartthrob Monroe Salisbury, in his final leading role. The film company, West Coast Films, constructed an entire Yukon village on an outdoor lot, shipping in ninety tons of salt from the nearby Leslie Salt plant to be used as snow. In a move which would have had the Hazardous Materials Office up in arms, the company reportedly manufactured a blizzard scene by blowing powdered asbestos into the air, in view of thousands of local onlookers. Despite the promise of these two early films, Pacific Studios remained largely unsuccessful, changing ownership several times. Though reportedly a fairly proficient enterprise, the studio faltered because, as an independent, it could not compete with the movie companies established in Hollywood. The studio lacked distributor outlets, failing to attract the amount of business and capital necessary to consistently draw top actors and technicians. The death knell blow, however, may have been Warner Brothers' release of The Jazz Singer starring Al Jolson. Built strictly for silent films, Pacific Studios had not included soundproofing measures in its assemblage. Because the studio stood within five hundred feet of Southern Pacific Railroad's main Peninsula line, the production of talking movies would have been impossible without completely reassembling the entire complex. Pacific Studios finally closed its doors in 1927. Today, the complex between 428 and 454 Peninsula Avenue houses the Civic Light Opera, a holistic health center, two insurance companies, a veterinary clinic, plus engineers, attorneys, and tax consultants. The original buildings once comprising Pacific Studios, however, still stand. Complete with palm trees, they remind local residence of the days when, for but a fleeting moment, the magic of Hollywood dwelt in San Mateo. History from Wikipedia, Encyberpedia and OldCompany.com (old stock certificate research service)