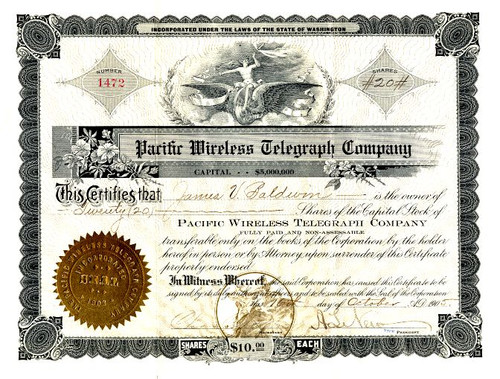 Beautiful SCARCE stock certificate from the Pacific Wireless Telegraph Company issued in 1905. This historic document has an ornate border around it with a vignette of an allegorical figure holding a train whistle in hand riding a eagle-winged wheel. This item has the company's Secretary, Charles Laphan and V. President, General A. L. New signatures and is over 110 years old. Issued to and endorsed by James V. Baldwin.

Certificate Vignette
Pacific Wireless Telegraph Company succeeded Pacific and Continental Wireless in August, 1903 and bought the Catalina Island circuit and stations. Pacific's stations included at least: A at Avalon, Catalina Island, CA G in Los Angeles, CA D in Port Townsend, WA DA in Seattle, WA, and SF in San Francisco, CA. [SWP] Continental is reported to have operated a station at Portland, OR that employed the callsign "O-2;" another such station operated out of Seattle with the call "S-2," from Queen Anne Hill with 5 kilowatts of power (5 kw). [SWP] Western Electrician, June 27, 1903, page 503: Wireless Communication Between Santa Catalina Island and the Mainland. BY FRANK C. PERKINS. As readers of the Western Electrician are aware, communication by space telegraphy is maintained between the mainland of Southern California and the island of Santa Catalina, across some 30 miles of the Pacific Ocean. A "wireless" newspaper is published in Avalon, on the island, by the Los Angeles Times, Los Angeles being the nearest large city, and the work of transmission is done by the Western Union Telegraph Company over the land stretches and the Pacific Wireless Telegraph Company through the ether over the sea. The latter company has offices on Ocean Avenue in Avalon, Santa Catalina Island. The accompanying pictures of the Avalon "wireless" station and down-town office and the additional details here given will be of interest. 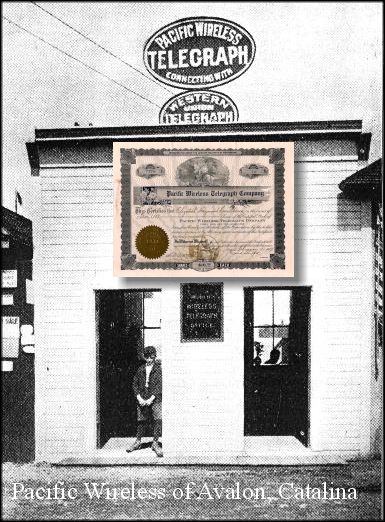 Up to the time of the installation of this space-telegraph station there had been no telegraphic communication between the mainland and Santa Catalina, which is quite a summer resort, and having an almost perfect climate during the entire year, is becoming very popular as a winter resort as well. The main village upon this island is known as Avalon and has a population of several thousand. The island is owned by the Banning Company, and several boats run between it and the mainland daily. The "wireless" station is located on a high bluff on the north side of Avalon Bay. The space-telegraph instruments are of the Swenson type, and the service has been satisfactory to the present time, several thousand messages having been sent with accuracy and dispatch. The vice-president of the Pacific Wireless Telegraph Company is General A. L. New, and the plant, which is located at Sugar Load Rock, is operated in connection with the Western Union Telegraph system, as the signs on the "down-town" office in Avalon (Fig. above) plainly show. The newspaper known as The Wireless of Avalon is published on the island of Santa Catalina, and the news of the day is communicated from the mainland to the island by the space-telegraph system. The instruments record the messages with accuracy, even during the most severe storms, which are of frequent occurrence about the island. These storms are terrific and the wind and waves are so high between the island and the mainland that the steamer communication is often stopped, and the space-telegraphic system is the only means of conveying messages to and from the mainland. As will be noted a complete generating plant is installed within the building for supplying the necessary current for operating the transmitting apparatus. The generator of this set is belt-driven by a vertical gasoline engine and is controlled by a switchboard upon which are mounted the usual pilot lamps, ammeter, voltmeter and main and feeder switches as well as the rheostat for varying the resistance of the field. The high-pressure coil is located at the left and is mounted upon a low platform, as noted in the picture. The aerial wires are connected with a pole of great height located on the bluff above the station. The Western Union wires are used in conveying the messages from the wireless-telegraphic stations at the water side to various points on the island and the mainland. According to the New York Times on January 10, 1904: WIRELESS COMPANIES MERGE. American De Forest Concern Acquires the International--Changes in Corporations. The acquisition of the property and patents of the International Wireless Telegraph Company by the American De Forest Wireless Telegraph Company, a subsidiary company of the De Forest Wireless Telegraph Company, was announced yesterday. By reason of the deal the International Wireless Telegraph Company ceases to exist. The consolidation was effected by the issuance of shares of the De Forest for shares of the International Wireless on a share-for-share basis. The International was organized originally as the American Wireless Telephone and Telegraph Company, with a capital of $5,000,000. It obtained control of five subsidiary companies--the Northeastern, Atlantic, Northwestern, Pacific, and Continental--each organized on a five-million dollar basis, and was subsequently reorganized as the Consolidated Wireless Telegraph and Telephone Company, with a capital stock of $25,000,000, through exchange share for share of the stocks of the controlled companies. This was later reduced to $7,500,000. Throughout these changes the stock had been offered to the public, and when the Consolidated was formed further stock offerings were made. Then came, a year later, the organization of the International Wireless Telegraph Company, with a like capitalization, which is now superseded by the acquisition of the latter by the American De Forest. The shares of the International and De Forest have a par value of $10. Electrical Review and Western Electrician, May 21, 1910, page 1044: Wireless Companies Consolidate. A number of wireless telegraph companies have recently consolidated under the name of the Continental Wireless Telephone and Telegraph Company. The corporation has organized under the laws of New York, and has a capital of $5,000,000. The plans of the consolidated companies contemplate transcontinental commercial business, as well as the continuance of the marine reports and shipping messages which have up to this time constituted the greater portion of wireless endeavors. The new company will enter into competition with the old wire telegraph companies for commercial and public patronage and its promoters say it will mean a considerable reduction from the tariffs now in force by the old telegraph concerns. The companies to form the consolidation are the Massie Wireless Telegraph Company, Clark Wireless Telephone and Telegraph Company, Pacific Wireless Telegraph Company, the Collins Wireless Telegraph Company of Newark, N. J. The officers of the Continental Wireless Telephone and Telegraph Company will be: President, F. T. Davis of Philadelphia; vice-president, Walter W. Massie, of New York; general manager, Thomas E. Clark of Detroit, Mich.; technical director, A. Frederick Collins of Newark, N. J., the inventor of the wireless telephone. Headquarters' offices will be in New York. Information in this listing includes articles by Bart Lee and www.californiahistoricalradio.com -- particularly Wireless Comes of Age on the West Coast). Also see Thorn Mayes in his book (from Biblio): Wireless Communication in the United States: The Early Development of American Radio Operating Companies By Mayes, Thorn L Book condition: Good ISBN 10: 0962517003 ISBN 13: 9780962517006 Book Description New England Wireless & Steam. Paperback. 0962517003 Unmarked text. Some wear, great reading copy. Ex-library: May have stickers, stamps ect. . Good. 1989-12-01. Read More Bookseller: Blind Pig Books (United States) Other History from StockResearch.pro (Professional Old Stock Certificate Research Service).